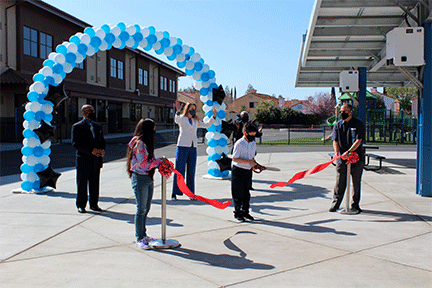 Outcomes for disabled students — especially those who are Black or English learners — in one Bay Area school district are so poor that the district is essentially denying the students their right to an education, according to a lawsuit filed Monday.

Pittsburg Unified in the East Bay disproportionately placed Black students and English learners in special education classrooms, did not provide them the services they need, and was more likely to suspend or expel those students, according to the lawsuit, filed by the American Civil Liberties Union of Northern California.

The suit, filed in Contra Costa County Superior Court, names the district, State Superintendent of Public Instruction Tony Thurmond, the State Board of Education, the California Department of Education and the state of California as defendants.

“Black students are literally being denied access to an education, and it’s not right,” said one of the plaintiffs, Jessica Black, who said her daughter, who is Black, fell behind academically while enrolled in special education in Pittsburg Unified. “I know we’re not the only family experiencing this unfairness. I wanted to shed a light on it.”

District Superintendent Janet Schultze called the lawsuit “disappointing,” because she said much of the information is misleading and doesn’t take into account the progress the district has made the past several years in closing achievement gaps among student groups and ensuring a high-quality education for all students.

“We will not let this lawsuit distract from the significant efforts of our district and staff to identify and address disparities,” Schultze said. “As attorneys attend to this situation, I am confident that the facts will set straight the many misleading comments in the ACLU statement, and I am equally confident that the dedicated professionals in our district will not let this deter them from focusing on the needs of our students, who are every day at the heart of their work.”

Pittsburg Unified is an 11,015-student district in eastern Contra Costa County, where 95% of the students are nonwhite and 77% are low-income. Just over 11% are enrolled in special education, which is about equal to the state average.

But students in Pittsburg Unified’s special education classes fare far differently than their disabled peers statewide. They’re almost twice as likely to be suspended and more than five times as likely to be suspended for willful defiance — a discipline category defined as disrupting school activities, according to 2018-19 data from the California Department of Education. California recently banned willful defiance suspensions in elementary and middle schools, encouraging districts to use restorative justice — encouraging students to talk through their conflicts — and counseling as an alternative.

“Pittsburg Unified has a separate, unequal and illegal system of education for students of color and those with disabilities,” said Linnea Nelson, senior staff attorney for the ACLU of Northern California. “They’re placed in substandard learning environments and subject to unwarranted suspensions and expulsions.”

The lawsuit demands the district improve its process of identifying students with disabilities so that Black and Latino students are not disproportionately placed in special education; provide more tutoring and other academic services to students in special education, so they can catch up to their peers; and change the discipline protocols so Black and Latino students and those with disabilities are not disproportionately suspended or expelled.

Jessica Black’s travails with the district started not long after the family moved to Pittsburg from Minnesota, she said. When her daughter, a third-grader with a learning disability, enrolled in school, she was often teased about her weight and hair, which was in an Afro style. One day, a white boy spat at her, and she threw an apple at him, Black said.

As punishment, the district placed Black’s daughter in a small counseling class apart from her peers, where she fell behind academically, Black said. In sixth grade, Black enrolled her daughter at a regular middle school, but the transition and academic challenges proved too great and Black’s daughter acted out. In sixth grade, she was suspended more than 20 times. One day, when Black’s daughter stormed out of a classroom, a district staff member called the police, and she was strapped to a gurney and transported to a psychiatric hospital, according to the suit.

By eighth grade, she was enrolled in independent study, where she remains. As an 11th grader, she’s doing second-grade-level math, her mother said. She wants to return — with academic and counseling support — to regular high school, so she can graduate and go to college.

“My daughter was punished for childlike behavior. She would have benefited from trauma-informed practices,” Black said. “The stakes are high because there’s still some time left, and I don’t want my daughter to end up in the school-to-prison pipeline. … This is our lives.”

Other students also suffered under the district’s policies, according to the lawsuit. One boy, a second-grade English learner with autism, was placed in a special education classroom where he watched Disney movies and did arts and crafts instead of learning to read, according to the suit.

Another student, a girl with a learning disability who is an English learner, is so far behind academically she has to repeat 12th grade in order to graduate.

It’s not the first time Pittsburg Unified has come under scrutiny for its special education practices. In 2016, a consultant hired by the district recommended dozens of improvements for how the district educates students with disabilities. The ACLU suit alleges that the district has not yet adopted many of those recommendations.