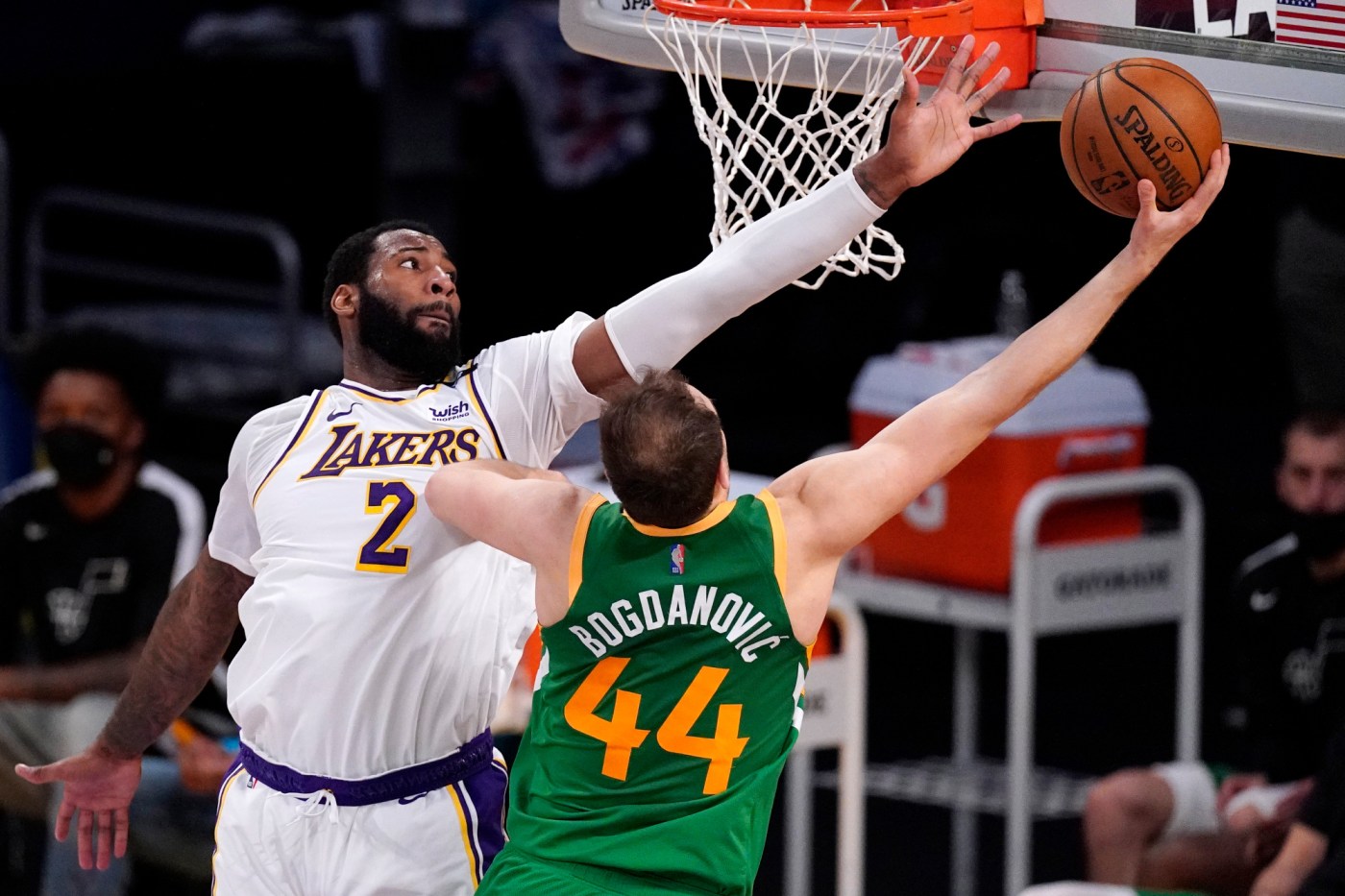 With a towel coating his sweaty crown, Andre Drummond waved to a few fans as he jogged off the Staples Center floor. It was his first home win in his new building, and while the bowl was hardly full, a familiar scene had just unfolded: purple and gold streamers cascading down as “I Love L.A.” played over the speakers.

“It’s kind of a surreal moment for me because I’ve been in this arena on the opposing side and seeing them win,” he said. “Seeing the streamers come down, and seeing the excitement and the energy in the arena and to be on this end and see what it’s like it definitely was a great feeling — and something that I want more of.”

In the same fashion, Drummond looked more a part of the Lakers on Saturday night than merely another player wearing a Lakers uniform. In the 127-115 win, Drummond had 27 points, 8 rebounds, 3 assists and 2 steals — what coach Frank Vogel called “the first real positive night, I think, in a Lakers uniform for him.”

Drummond has put up numbers in games, but against the undersized Jazz, his performance also dovetailed with team success: The Lakers outscored Utah by 18 points during his minutes, including a dominant showing in overtime. The likes of Juwan Morgan and Ersan Ilyasova couldn’t effectively guard him.

The beastliest stretch came in the third quarter, when Drummond showcase the speedy hands that Vogel has spent so much time talking up: In just two minutes, Drummond scored three lay-ups or dunks off of steals and defensive rebounds. The transition possessions helped the Lakers push the lead to double-digits in the third quarter, and showcased a bit of the speed that the oak-like center can burn.

The Jazz seemed set on challenging Drummond’s fit, burning the nets early from outside with small, shooting-heavy lineups. It worked, as they shot 12 for 24 in the first half from 3-point range. But Vogel said that Drummond eventually got into a good enough rhythm, closing out into corners on rotations, and challenging shooters on the perimeter — not his ideal roles, but ones he can do adequately.

Still, when the Lakers were battling back and forth with the Jazz for the lead, Vogel decided to sub out Drummond for a smaller group. While the center was antsy on the sideline, his coach gave him credit for staying ready through the substitution, then jumping back into overtime with six points.

“In that moment, it felt like to get the game under control that was the move to make,” Vogel said. “And we were able to get it back under control and he rewarded my trust by putting him back in there in the overtime by really dominating the overtime – with blocked shots and boards and finishing at the rim, even making his free throws when they tried to foul him.”

A source familiar with the team’s plans on the upcoming road trip through Washington D.C. said scheduling conflicts will prevent the Lakers from an official White House visit to honor their 2020 NBA title. Like other deferred celebrations, including the banner raising and a city parade, the Lakers may visit President Joe Biden at a later date.

White House visits have been contentious in the NBA for at least the past few years, and LeBron James played a central role in those developments. When the Golden State Warriors decided not to visit the White House in 2017 following their title, then-President Donald Trump said he rescinded the invitation. James jumped in the Twitter discourse, calling Trump a “bum” and adding: “Going to White House was a great honor until you showed up!”

The Warriors never attended the White House for either of their championships, and neither did the Toronto Raptors (who visited Ottawa and Prime Minister Justin Trudeau).

50 Of The Best Education Quotes For Teachers |