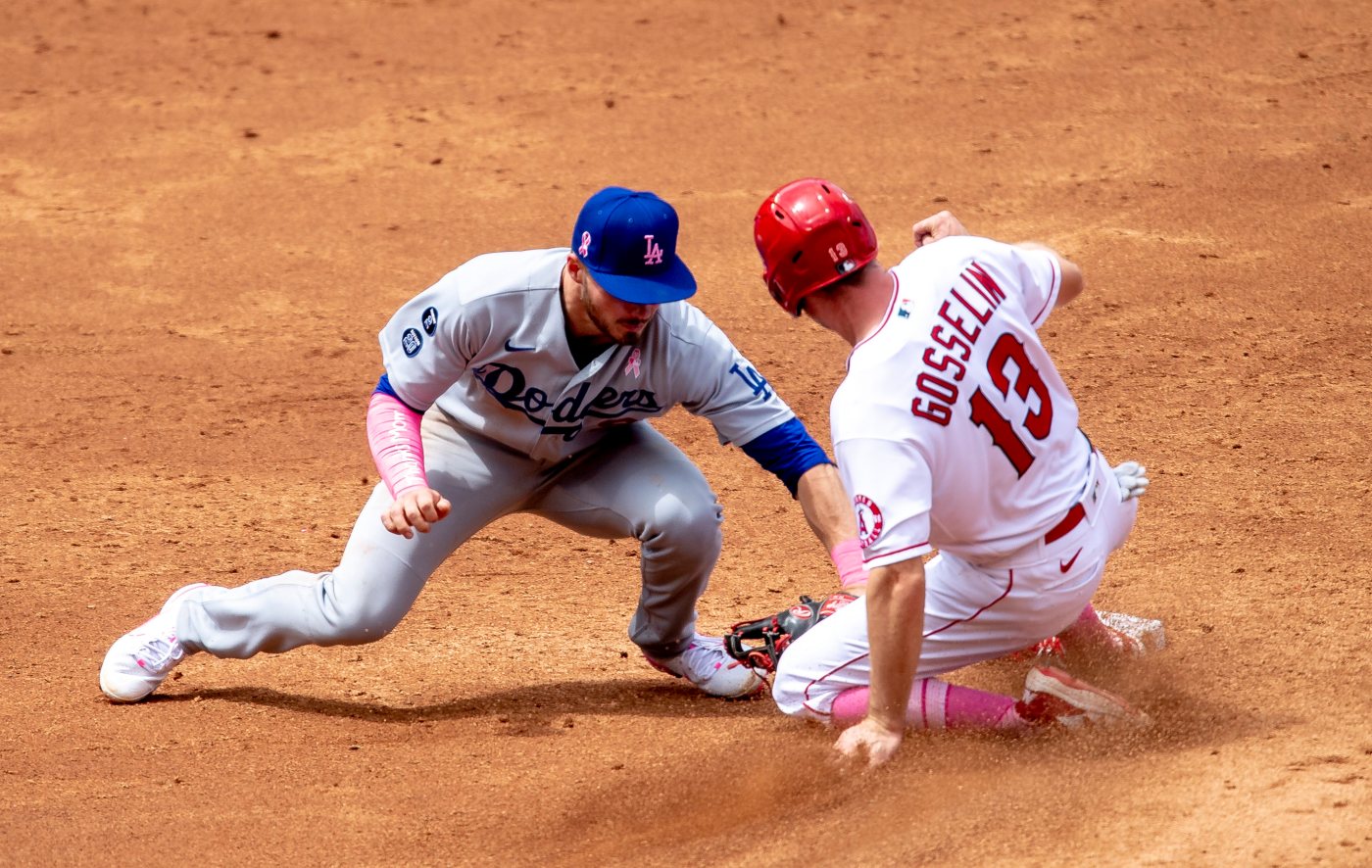 ANAHEIM — Since they were each swept in their previous series, someone was bound to feel better after this weekend’s Freeway Series.

Spoiler alert — it’s not the Dodgers.

The Angels snapped a five-game losing streak with a win in Friday’s game then took the series thanks to Jared Walsh’s two-run double fueling a 2-1 victory over the Dodgers on Sunday.

The Dodgers, meanwhile, ended the weekend having been outscored 13-2 over the final 13 innings of the series. They have not won consecutive games since April 17 and their skid keeps getting longer — 11 losses in their past 14 games and 15 in their past 20.

They continue living in a smoke-free environment — close but no cigar. Seven of those 11 losses have been by one run, a woeful category in which the Dodgers are the major-league leaders (10 one-run losses).

The blame continues to fall on a lack of consistent offensive production. The Dodgers scored 38 runs in their three most recent losses — but just 34 in their 11 losses. Sunday was the fifth time in their past 10 games that they manage just one or two runs.

The Dodgers walked five times in the first three innings and nine times in the game, collecting them like so many coupons for free hugs on Mother’s Day then putting them in a drawer and forgetting about them. Only one of the baserunners who reached on a walk came around to score as six Angels pitchers allowed just four hits.

Angels starter Jose Quintana came into the game with an ERA (10.59) and WHIP (2.24) so unsightly they seemed to be typos by the scoreboard operator. He walked five in the first three innings and needed 80 pitches to get the first nine outs. But he escaped largely unscathed.

Quintana left the bases loaded in the first inning, gave up a two-out RBI single to Chris Taylor in the third then left after a leadoff double by Corey Seager in the fifth. Seagere never advanced as Aaron Slegers shut things down.

The closest the Dodgers came to scoring again didn’t come until the ninth inning against Angels closer Raisel Iglesias.

After Mookie Betts drew a one-out walk, Seager singled to left (his third hit in the game). Both runners were stranded as Iglesias retired Justin Turner on a fly out and Will Smith on a bounce out.

The Angels’ offense, meanwhile, did a much better job of taking advantage when given an opportunity.

Dodgers starter Trevor Bauer gave up an infield single and walked the bases loaded with two outs in the third inning. Walsh fell behind 0-and-2, worked the count back even then lashed a curveball into the right-field corner. It hopped into the stands for a ground-rule double, scoring the only two runs of the game.

Bauer retired 10 consecutive Angels after that.