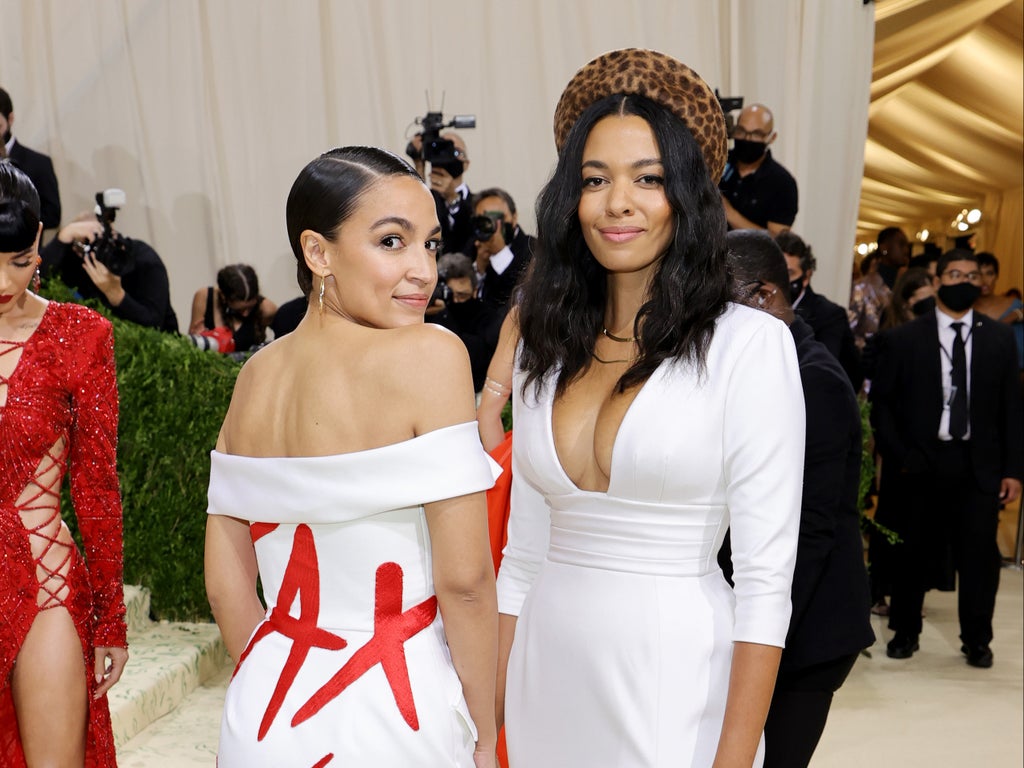 Alexandria Ocasio-Cortez made quite a statement with her 2021 Met Gala look, with the congresswoman arriving on the red carpet in a “tax the rich” gown.

On Monday, the 31-year-old politician arrived at the Metropolitan Museum of Art for her first-ever Met Gala appearance in a white strapless gown by Brother Vellies, which featured the slogan emblazoned on the back in red.

Ms Ocasio-Cortez paired the bold look with a pair of red lace-up heels and a purse which also read: “Tax the rich.”

According to Aurora James, founder and creative director of Brother Vellies and the founder of the 15 Percent Pledge, the outfit is about pushing forward.

“We can never get too comfortable in our seats at the table once they’ve been given,” James toldVogue. “We must always continue to push ourselves, push our colleagues, push the culture and push the country forward.

“Fashion is changing, America is changing. And as far as this theme goes, I think Alexandria and I are a great embodiment of the language fashion needs to consider adding to the general lexicon as we work towards a more sustainable, inclusive, and empowered future.”

While speaking with Vogue’s livestream host Ilana Glazer on the red carpet about the look, the Democratic congresswoman said that she and James came up with the outfit after “having a conversation about what it means to be a working class woman of colour at the Met”.

“And we said we can’t just play along, but we need to break the fourth wall and challenge some of the institutions,” she added.

On social media, the statement dress has been popular among viewers, with many praising Ms Ocasio-Cortez for using the opportunity to send a message while surrounded by some of the most wealthy and influential people.

“AOC showing up to the Met Gala, which is an event crawling with rich people and having ‘tax the rich’ in bold on her dress??? As. She. Should,” one person tweeted.

Another said: “AOC having ‘tax the rich’ on her dress is so iconic for the Met Gala.”

“AOC wearing ‘tax the rich’ to an event full of multi-millionaires is absolutely hilarious,” someone else wrote.

Kim Yo Jong insisted that South Korea should remove its hostile attitude first. Seoul: The

Brazilian President Jair Bolsonaro did not name the product that caused the row. (File) Brasilia:

Read More »
PrevPreviousMet Gala 2021: Stars arrive on red carpet for fashion’s big night
NextConcrete made from space dust and astronauts’ ‘blood’ could be used to build houses on MarsNext

Mother-of-two, 31, who was told she was ‘too YOUNG’ to get breast cancer dies of disease