In a tale of two sides looking to reach their first ever Champions League final, it was Chelsea who prevailed after a breathtaking semifinal.

Chelsea head coach Emma Hayes still has a chance to win an historic quadruple with the English team thanks to a ruthless performance in the second leg.

Much like the first leg, this game provided everything you would have wanted from a Champions League semifinal. The two best teams in England and Germany respectively delivered two matches full of quality, drama and sensational goals.

Bayern had the edge after the first leg but by the end of the first half in London the tie was headed for extra time.

The instrumental Fran Kirby was superb again, and she started and finished a slick move to give Chelsea the lead. Then Sarah Zadrazil scored one of the goals of the season from outside the box to level things only for Bayern to be pegged back when Ji So-yun, thanks to a crowded box, snuck the rebound from her blocked free kick in at the back post.

Having had the better chances in the first half, both before and after Zadrazil’s screamer, Bayern were very much in the tie.

Even when Pernille Harder snuck in to head home a third for Chelsea, nothing changed for the Bundesliga side. One goal would be enough to put them through on away goals.

But that goal never came. Despite impetus from Linda Dallmann off the bench, Viviane Asseyi was unable to poke home after a goalmouth scramble and then later saw her header deflected wide. Even goalkeeper Laura Benkarth came forward in a desperate attempt to get Bayern the goal their performance deserved. 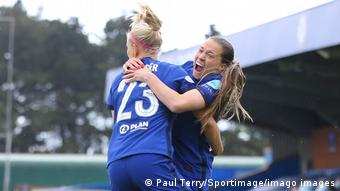 Fran Kirby was excellent for Chelsea

When Fran Kirby tucked into an empty net in the dying moments of the game, the scoreline was left lopsided. It hadn’t been Bayern’s day, but they had played better than the four goals they had conceded.

Their unbeaten run is over and they are out of both domestic and European cups. Bayern Munich now have to make sure they hold off Wolfsburg to seal the Bundesliga title otherwise this season will end with unwanted history.

For Chelsea, game-changing history beckons. They face Barcelona in the final on May 16 after a brace from Lieke Martens in the second leg helped the Spanish side beat PSG 3-2 on aggregate.