Last August, Belarusians took to the streets across the nation to protest 26 years of autocratic rule. They claimed that Belarus’s President Alexander Lukashenko had again rigged the vote to claim an overwhelming victory in the latest presidential election.

Under the red and white flag of the uprising, hundreds of thousands of protesters demanded free and fair elections, and for strongman Lukashenko to step down in the face of arrests, torture and intimidation.

Six months later, the protests have started to dissipate. But opposition to the regime remains strong. Figures in culture and the arts who are the subject of increasing suppression are risking jail and to speak out. World Press Freedom Day on May 3 also remembers the increasing number of journalists who refuse to be silenced in Belarus, despite the threat of persecution. 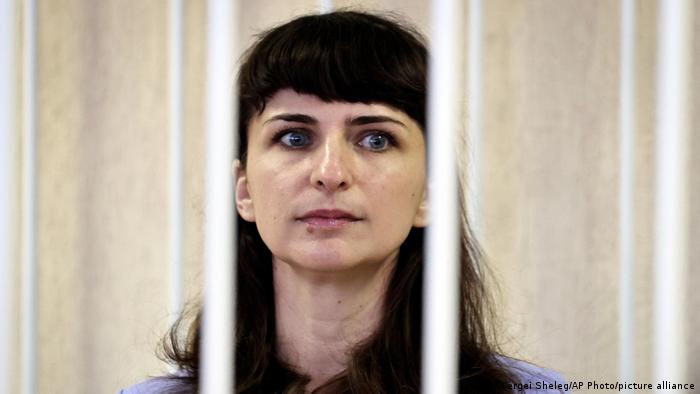 Belarusian journalist Katsiaryna Barysevich is held in a cage during a court hearing in March. She was sentenced to six months in prison for reporting on the death of protester Raman Bandarenka

“Everyone has understood that being active can endanger your life,” said Belarusian writer Volha Hapeyeva, who is currently a Writers in Exile fellow at the German PEN Center. “In Belarus, you can literally be arrested for wearing red-and-white socks,” she said.

The white-red-white flag flown by the opposition commemorates the flag of the first independent Belarusian state proclaimed in 1918. President Lukashenko abolished the flag in 1995 and introduced state symbols strongly reminiscent of the Soviet era — an era when Belarusian traditions and language were lost.

Tatsiana Hatsura-Yavorskaya, director of the Watch Docs human rights documentary film festival in Minsk, is one example. She was detained by police after co-organizing “The Machine Breathes, and I Don’t,” an exhibition dedicated to medical workers on the frontline of the COVID-19 pandemic. 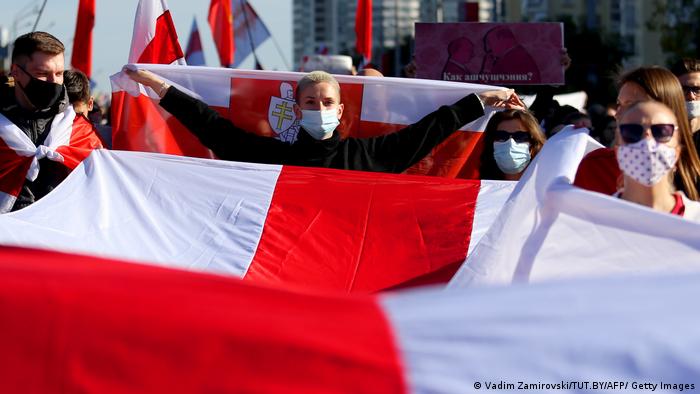 The former Belarus flag has become a symbol of the opposition

Noting how the regime is playing down the pandemic by withholding reliable data regarding infections and deaths, the exhibition was shut down by the authorities just days after it opened.

Hatsura-Yavorskaya was then apprehended, while her apartment, computer and cell phone were confiscated. “I spent ten days in detention, in the end I was released because I have a child,” she said, adding that some colleagues remain in detention.

She is pessimistic about her own short-term future and is not allowed to leave Belarus. “I expect to be arrested again any day now.”

The literary world is also being suppressed by the government. Publishers including Henadz Viniarski, of Knihazbor Publishing, and Andrei Yanushkevich, founder of Yanushkevich Publishing, have been arrested and their bank accounts frozen.

The situation is tense. Hardly a day goes by without more arrests. Many people vanish or go into hiding.

“The situation is getting more difficult every day for us who work in the culture sector, as well as for everyone in the opposition,” says an artist from Minsk who asked to remain anonymous. “I am considering whether to exhibit the paintings I made of the events last August — honestly, I am afraid to do so.”

Police patrol her neighborhood daily, she said. “I was on my way to work yesterday wearing a red coat. If I had been wearing something white as well, they would have stopped me for sure. They distrust everyone.”

The state against its own people

Like many others, the writer and poet Julia Cimafiejeva fled into exile. But she continues to write passionately about events in Belarus.

“We all thought you were a woman,” she begins in the poem My Homeland, referring to her native country in the female form. “Blue-eyed, wheat-haired, / life-giving,” she continues. “But we didn’t notice … how you bared your teeth, / how you put on khaki pants, / how you put a special helmet on your shaved skull and painted a beard. / How you took the baton …”

My Homeland appeared in the anthology, Belarus! The female face of the revolution, which was published in November in Germany after Cimafiejeva actively participated in the protests at home. “I was lucky not to be arrested,” she said.

“I don’t want to live in a repressive police state,” she added. “That’s why I decided to flee.”

“Just about every time Lukashenko was re-elected, there were repressions,” said Cimafiejeva, who has been living abroad since the end of 2020.

But she explains that until 2019, cultural life in Belarus was relatively stable.”The state never really accepted independent culture, and yet they left us alone, they didn’t interfere the way they do now. But today, it seems to me, public cultural life is almost paralyzed.”

The member states of the European Union have not recognized the election results, and solidarity demonstrations are held regularly in many European cities.

But so far there has been little more than appeals. “Last year we had beautiful, colorful pictures with women holding flowers, with white-red-white flags, the world was interested in us,” said Cimafiejeva. “What is going on now is not so photogenic, it is impossible to take pictures in prison cells where people are tortured every day.”

This article was adapted from the original German version.

Eurovision 2021: How this year's acts are aiming for a Covid-safe contest

Bond played a major role in my career, says Bumrah