While the interiors of the Humboldt Forum will gradually be made accessible to the public throughout the rest of the year, the Berlin institution’s first “gates” are now open to visitors.

Six massive entrance portals give access to the inner courtyards of the reconstructed Berlin Palace.

The so-called Schlüterhof and the Passage, a wide colonnaded path that runs right through the building, are the new public spaces to be discovered. They were not part of the historical plans of the castle, but were rather specifically designed by Italian architect Franco Stella as a kind of “city gate” in the new institution.

A passage across the castle

The passage across the roughly 40,000-square-meter (430,000-square-foot) building connects the Lustgarten in front of the Berlin Cathedral with the Breite Strasse behind the palace. The colonnaded passage also houses different cafes, which are now also open to visitors.

Reconstructed in the Baroque style, the Schlüterhof within the castle walls is reminiscent of an Italian piazza, with historical paving made of new materials. The Humboldt Forum website describes it as “an urban location with a wonderfully theatrical feel that functions both as public stage and events venue.” 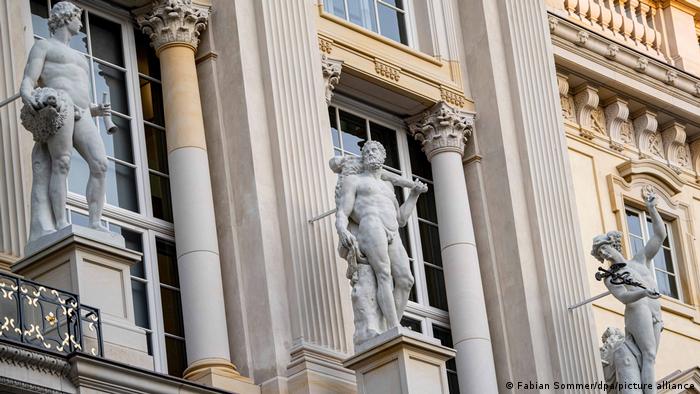 Statues that can be seen from the Schlüterhof

The Berlin Palace was badly damaged in the Second World War. In divided Berlin, the East German government decided to blow up the ruined castle in 1950 and replace it with a state building hosting the GDR’s parliament, known as the Palace of the Republic.

Closed following the fall of the Berlin Wall in 1989, plans to demolish the asbestos-ridden building were finally completed in 2008. The project of extensively reconstructing the former Royal Palace on the site was not welcome by all Berliners.

Construction work has been ongoing since 2013.

According to the latest announcements, the Humboldt Forum in the reconstructed Berlin Palace is due to open in mid-July 2021. The Center for Culture, Art and Science, which cost around €680 million ($823 million) to build, will incorporate two former museums, the Ethnological Museum of Berlin and the Museum of Asian Art.

The ongoing discussions about the restitution of colonial art has also contributed to the controversy surrounding the Humboldt Forum. Some of the Benin Bronzes, which are considered looted cultural assets from colonial times, are also to be exhibited there. Germany and Nigeria are currently negotiating the restitution of the bronzes, which should start in 2022.

The new cultural institution was initially set to open in December 2020, but plans were thwarted by the COVID pandemic.

Security experts from the IT sector have recently pointed out that there are still too many technical problems to deal with, questioning whether the mid-July deadline could be met.

The Prussian Cultural Heritage Foundation, the governmental body that oversees several Berlin museums including the Humboldt Forum, is confident that its opening will be celebrated in July as planned.

By the end of the year, other areas of the palace are to be gradually opened to the public as well.

This article was adapted from German.

WASHINGTON—The U.S. and Turkey have agreed to a plan for the Turks to continue providing

At least one staffer at the U.S. Embassy in Kabul has died amid a surge

A Siberian tiger leapt over, killing a man on the spot in a South African

The Kremlin welcomed dialogue of the US and Russian presidents on strategic stability.. Moscow: The

Fans, Teammates Past and Present React as Sergio Ramos Bids Adieu to Real Madrid After 16 Seasons

Bopanna and Divij lose – The Hindu

U.S. Open to welcome back tennis fans at 100% capacity