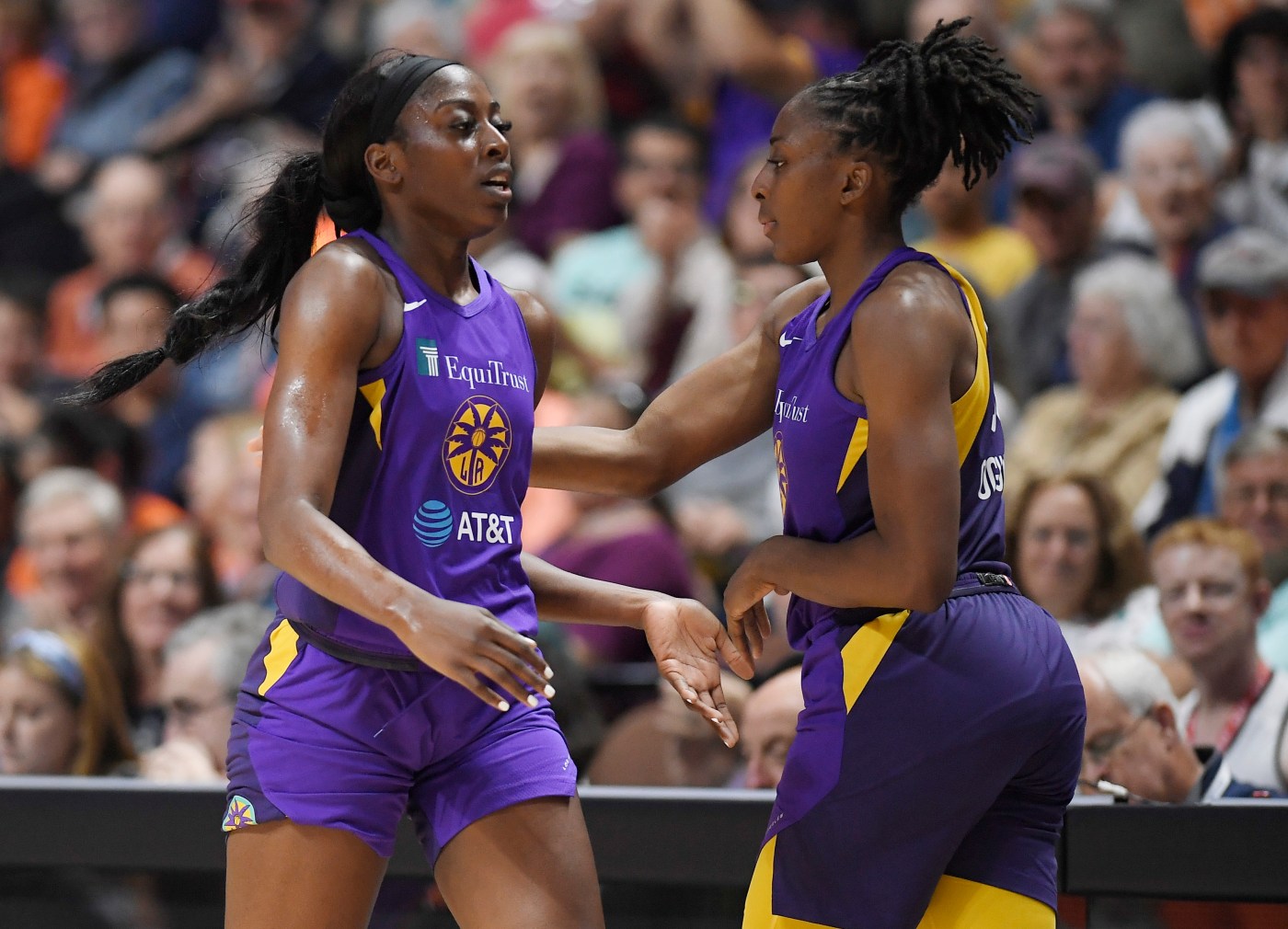 There’s multi-tasking, there’s juggling and then there’s the summer that Chiney Ogwumike has planned – a full WNBA basketball schedule and a job co-hosting “Chiney & Golic Jr.,” the daily, national radio show on ESPN.

Ogwumike broke the news that she’d re-signed with the Sparks herself on Thursday in a blog post on her personal website.

“A lot of people say, especially when it comes to women, that we can’t have it all,” wrote Ogwumike, who is set to team up again with her older sister Nneka Ogwumike. “But I’m trying to be living proof that we can, or at least, come as close as possible. I want to win a WNBA championship with my sister, and I want to keep pushing boundaries off the court.

“I’ve been working with L.A. Sparks Head Coach and General Manager Derek Fisher and my agent Allison Galer to be as flexible as possible so that we can stay true to our mission of building the best Sparks roster right now and for the future. Fish has been super understanding of my broadcast schedule and how we are going to make everything work. And I have an amazing boss at ESPN in Dave Roberts who helps make my dreams come true on-air.”

Chiney – at 28, two years younger than Nneka – opted out of playing in the WNBA bubble last season. While the season proceeded in Bradenton, Florida, she became the first Black woman and first WNBA player to host a national radio show on ESPN.

Although her Sparks contract expired after last season, the team retained exclusive negotiating rights because medical precautions caused her to opt out.

In the post, she shared her thought process for opting out of the 2020 season, which she described as “really, really difficult,” noting that her injury history – including the microfracture in her right knee that forced her to sit out the entirety of 2015 season and the Achilles injury that cost her the 2017 season – ultimately made the difference.

“My previous injuries have given me strength and built my character, but unfortunately, they require me to be careful with my preparation leading up to the season,” she wrote. “It takes me at least eight weeks to properly train my body to be ready to go, and I was looking at just three weeks. And 22 games in 50 days. I chose to be proactively cautious and put my body first, opting out of the season.”

Now, she says she’s excited to return to the court and continue her pursuit of a championship, this week signing a multi-year contract with the Sparks – who lost stars Candace Parker and Chelsea Gray in free agency earlier this offseason.

“I have a new workout partner and teammate in Amanda Zahui, and we are full steam ahead getting ready for training camp,” Ogwumike wrote. “I’ve never had this much time in one city to prepare for a WNBA season, and you know I’m about to take that for what it’s worth.”

She’ll also have Nneka. The older Ogwumike sibling has yet to re-sign but a league source indicates she’s committed to a multi-year deal to remain with the organization, which on Jan. 14 gave the six-time All-Star a “core” designation to establish exclusive negotiating rights with her.

Derek Fisher, the Sparks’ coach and general manager said in a news release that the team is happy to reincorporate Chiney Ogwumike, a two-time All-Star, for her on-court talents as well as her off-the-court attributes.

“We’re excited to have Chiney Ogwumike back on the court with us,” he said. “In 2019, Chiney brought us energy, defense, rebounding and an ability to score efficiently. Off the court, she continues to raise the bar as a role model, entrepreneur and civic leader. She’s an important part of our Sparks family and we’re looking forward to having her back.”

In 2019, Ogwumike played in 32 regular-season games and all four playoff games for the Sparks, averaging 9.6 points and 5.8 rebounds in 21.8 minutes per game.

Like Nneka, Chiney attended Stanford before being drafted No. 1 overall. She was the 2014 WNBA Rookie of the Year after averaging 15.5 points, 8.5 rebounds, 1.1 steals and 1.1 blocked shots per game.

“While I’m truly blessed, I hope people can understand that my jobs are not easy, and balancing it all is surely not easy,” Ogwumike said. “For my family and friends reading this, I appreciate all of you for being my support and helping me hold it together.  And for never calling me crazy for trying to achieve all of the dreams at the same time.

“For the first time in a while, it feels like everything is coming together. It’s just missing one thing … or two according to my Mom. Both, of course, are rings. Lol.”

Race Between Covid-19 Vaccines and Delta Variant Plays Out in U.K.

SEOUL—In nuclear diplomacy with the U.S., North Korea is playing hard to get, for now.