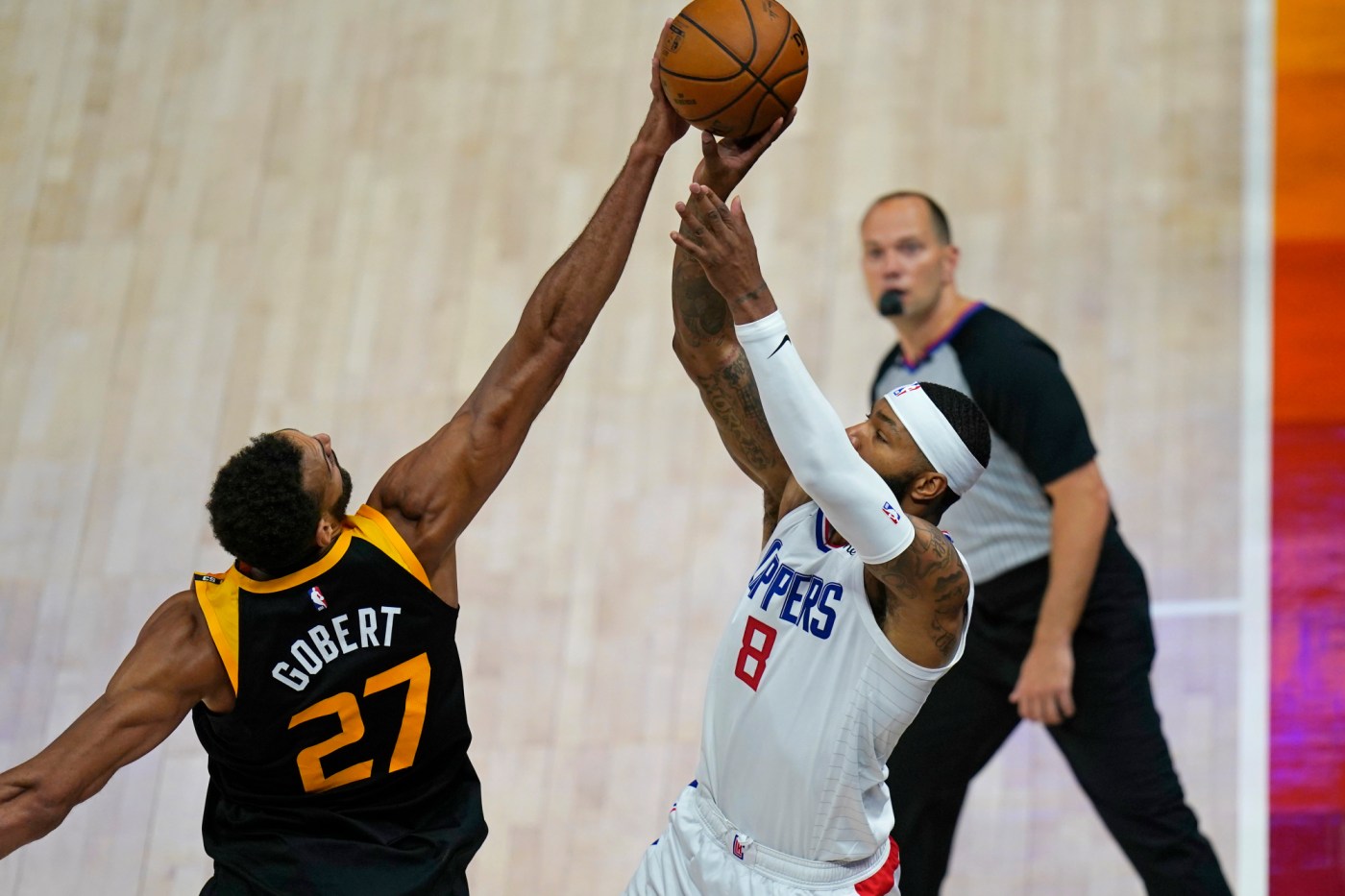 The Clippers got rid of Dallas. Now they see what Big D really is.

It is Rudy Gobert, the Stifle Tower, who is always ready to play Whack-A-Shot but really leads basketball in the nonexistent category of Shots Dissuaded.

It is a sturdy corps of mid-sized guys who are constantly in denial, of passes, dribbles and unfettered movement.

It is a wall of noise at Vivent Arena, in downtown Salt Lake City, that will only intensify with each step the Utah Jazz take toward the Western Conference finals.

In other words, it’s not Dallas anymore, and the Clippers face more complications than the mere task of out-pointing Luka Doncic.

The Clippers can rationalize a lot of things from Tuesday night’s Game 1 of their second-round series, and can actually do so rationally. But sometimes your first chance to strike a blow on the road is your best chance. This one officially disappeared when Gobert ranged into the left corner and blocked the final 3-point bid from Marcus Morris.

Utah won, 112-109, for a 1-0 series lead. Donovan Mitchell outplayed his reputation. Kawhi Leonard and Paul George played below theirs.

The Clippers will maintain that they were herded onto an airplane and into the deafening altitude right after they won Game 7 over Dallas on Sunday. If they’re honest, the Clippers will also realize they lost to a team that missed 20 consecutive shots in the first quarter Tuesday.

In retrospect, Utah’s defense saved the game right there. The Jazz took a 10-2 lead and then trailed 24-12, thanks to Luke Kennard’s 3-pointer after Ivica Zubac fetched an offensive rebound. Utah only trailed 25-18 after that quarter, and even though they missed 20 of 27 3-point shots in the first half, they never lost the scent.

Enter Mitchell, who is permitted as much offensive freedom as anyone in the league and takes every inch of it in the postseason. He had a one-man, 10-point run early in the third quarter, and wound up with 45 points, matching his uniform number.

Mitchell isn’t the passer Doncic is, but he is at least as tough a cover. When he wasn’t hoisting 3-pointers at any sign of daylight, he was capturing the lane through pick-and-rolls and finishing plays under duress.

“He’s super-aggressive,” George said. “He’s got a strong body and he’s really taken up the role of being a leader for them.”

Mitchell had 32 points on 11-of-16 shooting, and the Clippers will spend Wednesday and much of Thursday seeking ways to reduce that.

“I thought we were a little fatigued in the second half,” Clippers coach Tyronn Lue said, “and he had a really good game, but we also had some mental mistakes we’ll have to look at.”

But the Clippers really lost the game on the other end. George was 4 for 17, which will bring out the Greek chorus, but he also had 10 rebounds and 10 trips to the foul line.

Leonard got early fouls and faced remorseless defense from Bojan Bogdanovic, Royce O’Neale, and whoever else wanted the challenge. The languid 18-footers that Leonard used to wear down Dallas were unavailable. He had 23 points and was 8 for 15 from 2-point range, a place where he shot 69.1% in the Mavericks series.

Reggie Jackson and Marcus Morris Sr. were 7 for 20, and Jackson eventually fouled out. But Leonard, usually the port in the storm, was hard to find.

“We had a pretty good rhythm in the first half,” Leonard said, “but we were flat in the third quarter. They’re a good defensive team and they fought hard.”

“I think they got into us physically with their defense,” Lue said. “We have to own our own space. We didn’t match their physicality. They made some good plays in defending their in-bounds plays, too, and got some baskets out of that.”

With all that, the Clippers trailed by 10 with 5:21 left and still took the game to the buzzer. Mitchell tossed a pass out of bounds with a six-point lead, and George drilled a 3-pointer with 37 seconds left.

After Mitchell missed another 3-point attempt, Lue decided not to call a timeout, unwilling to let Utah coach Quin Snyder remove Gobert or make other substitutions. That would have been preferable, as it turned out, as the Jazz heatedly denied the Clippers’ comfortable looks, and Gobert closed out on Morris.

The Clippers had that chance in the first place because Zubac was so fierce, with three blocks, and because Kennard took up where he left off Sunday by hitting five of seven shots. “They were just doing a good job finding me,” Kennard said.

(Not all turnovers are made by players. In Monday’s column about Game 7 against Dallas, I mischaracterized Kennard as a player who had spent extensive time with Grand Rapids in the G-League, when actually he only spent one game there, and that was after a knee injury.)

Playoff series are supposed to get tougher as they go. Few things would be tougher than trying to win a Game 7 on this court as a visitor.

THE CLOSEOUT.
THE SECOND CONTEST.
THE GAME-SEALING BLOCK.
GOBERT THINGS 🤯

The @utahjazz‘ big man in the middle comes up big on defense to win a thrilling Game 1! #NBAPlayoffs pic.twitter.com/3q3npSfghk

Katrina Kaif begins readings for Sriram Raghavan’s next with Vijay Sethupathi, to shoot after Tiger 3

Songs from the street ⋆ TheVoiceBW