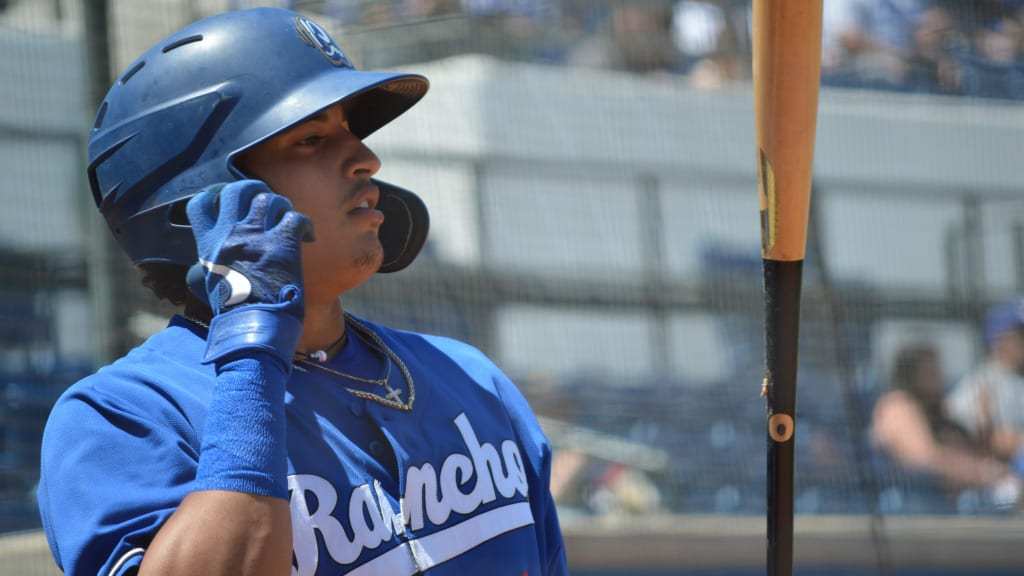 Diego Cartaya is the only child of Jesus Cartaya and Mery Larez of Maracay, Venezuela. The 19-year-old baseball prodigy hasn’t seen his parents in person for almost a year and a half. Lately, he’s been video chatting with them before every game he plays for the Rancho Cucamonga Quakes, the Dodgers’ Class-A affiliate. Cartaya has a .419 batting average and five home runs in eight games since his promotion. He appears impervious to anxiety in any form, whether from separation, the pressure to perform, or holding long conversations in English.

During an extended interview conducted entirely in his second language on Monday, Cartaya explained the necessity of the distance from his homeland. When spring training shuttered a year ago because of the coronavirus pandemic, so too did the airports in Venezuela. Cartaya couldn’t fly home if he wanted to. What followed was a total immersion in American culture, and catching, and the culture of an organization that lavished a $2.5 million bonus on him in 2018, when he was the top catching prospect on baseball’s international amateur market.

“It’s difficult,” Cartaya said of the time away from home. “I would like to see my family. But I know that at some point I’ll be able to, and just think that I’m doing all of this for them.”

Cartaya is doing more than hitting the snot out of baseballs, though he is doing that too.

Begin in March 2020 when the world shut down. A few players continued to train at the Dodgers’ spring training facility in Camelback Ranch in Glendale, Arizona. Many others headed home, whether in the United States or abroad. Cartaya went to a small town in the northwest pocket of South Carolina.

There, he lived with the family of Travis Barbary, the manager of the Dodgers’ top minor league affiliate, including his 24-year-old son, Chase, a catcher in the Dodgers’ organization. Cartaya said he needed only a day to feel comfortable in his adopted home.

“They’re really nice,” he said of the Barbarys. “They take care of me. I feel like they’re my family.”

Travis Barbary was the Dodgers’ catching coordinator before he began managing in Triple-A. That made him a natural mentor to his young charge. He also has experience housing teenage Venezuelan catching prospects; Keibert Ruiz spent his first offseason in the United States with the Barbary family five years ago. Now it was Cartaya’s turn.

The immersion project began with morning workouts with Chase. It often ended on the PlayStation console, or in homemade dance videos with the Barbarys’ teenage children. Cartaya fell in love with fried chicken and country music. His English improved.

By the time he reported to the Dodgers’ alternate site camp in the summer, Cartaya was familiar with the rhythms and routines of life in the United States – at least, the socially distanced version of it.

Cultural fluency – knowing words in English and, just as importantly, how they’re used in the U.S. – goes a long way for a catcher. More than any position on a baseball field, his success depends on his ability to send and receive information. Each day, the starting catcher absorbs and implements a scouting report on each opposing hitter. So too must he improvise, particularly on nights when the pitcher’s “stuff” is not his “best stuff.” A team’s success depends in large part on a catcher’s ability to speak the pitcher’s language – whether via between-innings chatter in the dugout or with body language on the field. It is a position built on communication.

This is one reason why the Dodgers don’t merely require their Latin American catchers to learn English. Ryan Sienko, the team’s catching coordinator, said the Dodgers’ English-speaking receivers have been required to learn Spanish since spring training began.

Cartaya, effectively bilingual at age 19, already has a leg up on many of his peers.

“Half of our players are Spanish speakers,” Sienko said. “If we’re only doing that halfway, it’s not true to our values. (Cartaya), along with some of the other Spanish-speaking guys, have helped our English-speaking guys start that process.”

This helps explain why reviews of Cartaya’s defensive play match the Dodgers’ ardor for his bat: he checks the “ability to communicate” box with ease. Sienko said Cartaya’s framing ability, and his ability to adjust a game plan based on an opposing hitter’s swing, have garnered high marks too. Between his bat and his build (6-foot-3 and 219 pounds), Cartaya is not limited to one position. But there is early reason to believe he can stick at catcher.

“Sometimes when you see what people say about you, and what they expect you to be, some people feel like they have pressure,” he said. “Like ‘I have to be good because of this, because they’re expecting me to be good.’ When you don’t know those things – of course you’ll hear them – you’ll just play. Just have fun. You don’t feel as much pressure.”

In his most recent game Sunday, Cartaya hit two home runs at LoanMart Field. He ended a game last week with a grand slam, taking five steps to watch the ball soar before flipping his bat. No pressure indeed.

U.S. Considers a Plan to Relocate Afghans Who Aided U.S. During War

RIO DE JANEIRO—The pandemic has pummeled Latin America and plunged many people into poverty. But the finance