Everything you need to know about the Met Gala 2021

Unofficially, the night’s festivities have been called many things, including “the party of the year,” “the Oscars of the East Coast” (mostly because of the star quotient and the elaborate red carpet, where guests pose on the grand entrance stairs to the museum) and, somewhat pointedly, “an ATM for the Met,” the last by publicist Paul Wilmot.

The party signals the opening of the Costume Institute’s annual blockbuster show. This year’s exhibition is “In America: A Lexicon of Fashion,” which sounds kind of like Bruce Chatwin’s “In Patagonia,” but is actually part one of a two-part mega-show/argument for the relevancy and power of American fashion.

The hosts are the Gen Z dream team: Amanda Gorman, the 23-year-old inaugural poet; Timothée Chalamet, 25-year-old dreamboat of “Dune”; Naomi Osaka, 23-year-old tennis champion and mental health activist; and Billie Eilish, the 19-year-old music phenom. Honorary chairs include Anna Wintour, the magical manipulative Wizard of Oz for this particular event; Adam Mossari, CEO of Instagram, which is underwriting the exhibition and party along with Condé Nast; and Tom Ford, who will probably be dressing many attendees. 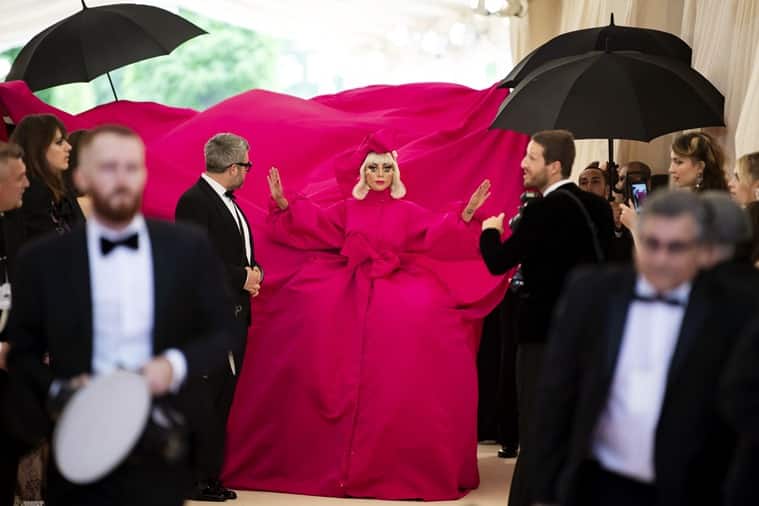 Lady Gaga arrives at the Met Gala in the first of the four different outfits she wore on the red carpet, in New York, May 6, 2019. (Source: New York Times)

Q: Wait — you said the party is always the first Monday in May. According to my calendar, this one is taking place the second Monday in September. What gives? Is this like … Met Jr.?

A: It is true that for one-time only, a Met Gala is being held in September. (To be absolutely accurate, the galas were originally held in November; they moved around a bit and settled in May in 2005.) Part two will be unveiled with its own extravaganza next May. But that doesn’t mean this gala is a lesser gala!

It is, however, a downscaled event — the guest list is about one-third smaller than usual — and it’s very youth-focused. Not just because of the co-hosts, but because the exhibition it celebrates is 70% young designers, most of whom have never gotten to go to the gala or imagined their clothes might end up in the museum.

A rumor went viral in August that this also meant an infestation of TikTokers and other social media influencers, but that turned out to be more like a game of fantasy guest list. Besides, the truth is such influencers have been regulars at the gala for years now.

The new date is actually yet another unforeseen result of the pandemic. Because the gala was canceled in 2020 (“About Time,” the show it celebrated, opened last October instead of in May), the Costume Institute, like the American fashion industry, took a financial blow. It is the only one of the Met’s curatorial departments that has to fund itself, fashion having been iffy as an art form when the institute was established, and the gala is its primary source of income. In 2019, the ball raised $15 million. (For some context, that same year the New York City Ballet gala raised just over $2.3 million.)

Q: Holy museum shows, Batman! That’s a lot of money. How much does the gala cost?

A: Tickets are $35,000 apiece, and tables range from $200,000 to $300,000. This year, word spread that certain brands were being asked to “sponsor” young designers — you know, the doing-it-on-their-own ones who are featured in the show and who were particularly hard hit when COVID-19 closed department stores, causing retailers to cancel orders — not just as guests but to be fairy godparents.

Q: Why would anyone pay that much for a party? Especially during a pandemic?

A: Wintour, the editor of American Vogue and the artistic director of Condé Nast, became chair in 1995 and took over the leadership in 1999. Since then, she has been instrumental in transforming a local philanthropic event into the ultimate global celebrity/power cocktail.

Take a jigger of famous names from fashion, add film, tech, politics, sports and business, and mix. (Hence those hosts: Wintour is entirely unsentimental about out with the old and in with the influencers.) Indeed, it remains the gold standard of parties and the one by which other benefits are measured. This year the gala is also being framed as part of New York’s reemergence, along with the reopening of Broadway, indoor dining and the U.S. Open. In other words, you’re not just going to a party, you’re demonstrating your faith in this city’s future!

That said, lots of designers who are based in Europe and usually make the trip at Wintour’s bidding are not coming, either because of quarantine rules or because they have to work on their own shows. And rumor has it that some Hollywood stars are also sitting this one out, perhaps because of health concerns or because of the fear that partying while people are sick is not the best look.

Q: Speaking of COVID-19, what precautions is the Met taking?

A: With a smaller guest list, social distancing (at least among dinner tables) will be easier, and guests will have to show proof of vaccination, receive a negative COVID-19 test result and wear masks except while eating. Given the issues of posing while masked, and the emphasis on entrances and schmoozing at the event, that may be a hard one to enforce.

Q: So should we expect a lot of black-tie masks? Will there be other fashion statements?

A: Every gala has its own dress code, themed to the exhibition, and the designers who attend almost always come with their own celebrity, whom they dress accordingly. This means the guest becomes a walking advertisement for the host, as well as an ad for the show.

This has created a virtuous circle of one-upsmanship, as brands vie for the best stars and stars vie for the most eye-catching outfits. As a result, the Met has far exceeded any other red carpet — the Oscars, the Cannes Film Festival, even the MTV Video Music Awards (which is taking place the night before) — when it comes to statement-making, paparazzi-catching looks and, sometimes, related faux pas).

In 2018, for example, for the celebration of “Heavenly Bodies: Fashion and the Catholic Imagination,” things got really extreme. Rihanna came as the pope. Katy Perry wore such enormous angel wings that she practically knocked over a fellow guest. And Sarah Jessica Parker had an entire Nativity scene on her head.

That one wasn’t topped until 2019, when “Camp: Notes on Fashion” took the event to a whole new level: Lady Gaga, a host, did a striptease of four different outfits for her entrance alone; a winged Billy Porter came borne aloft on a litter carried by six shirtless men; and Cardi B appeared to be dressed as a uterus.

This year, the dress code is “American Independence.”

Q: American Independence? What does that mean?

A: Your guess is as good as mine! Odds are very high, however, that it means American designers — and not just the big brands we are used to seeing on the red carpet, like Tom Ford, Michael Kors, Ralph Lauren, Tory Burch and company. Look out for newer, more avant-garde names (Collina Strada, Area, Christopher John Rogers, Pyer Moss) and some poetic license with the semiology of the country. Given the literal expressions of past themes, though, you may also expect a lot of red, white and blue, some star-spangled stripiness and a Lady Liberty or two.

We asked Gorman if she would give us a hint about what she was wearing, but she declined, saying even her mother didn’t know. Wintour did let slip, however, that many of the guests Vogue is advising are requesting vintage. Also, she will be wearing “a homage” to her “dear friend, Oscar de la Renta.”

Q: Vintage! I like what that says about sustainability. OK, what if I want to go?

A: Good luck. Unlike other cultural fundraisers, like the Metropolitan Opera gala or the Frick Collection Young Fellows ball, the Met Gala is invitation only.

Qualifications for inclusion have to do with buzz and achievement (and beauty) — aka, the gospel according to Anna — more than money. Wintour has final say over every invitation and attendee, which means that even if a company buys a table, it cannot choose everyone who sits at its table. It must clear the guest with her and Vogue and pray for approval.

A: This year, about 400 Chosen Ones, on a guest list guarded with the obsessive secrecy of the Illuminati members roll. But keep an eye out for Tracee Ellis Ross, ASAP Rocky, Lourdes Leon, Taraji P. Henson and Simone Biles. Q: What happens when guests get inside?

A: It’s another secret. Posting on social media has been banned since some supermodels were caught taking selfies while smoking in the bathrooms.

What I can tell you is this: There is a receiving line inside with the hosts, usually next to some towering floral arrangement by Raul Avila that pretty much takes over what is normally the Great Hall’s central information booth. Guests file by, air kiss — or this year maybe fist bump or wave from afar — Wintour and Co. and then tour the exhibition on their way to the cocktail party, so they are theoretically forced to experience some culture.

After cocktails, they are called to dinner, which this time will involve a special vegan menu by 10 diverse, up-and-coming New York chefs (more youth) chosen by Marcus Samuelsson and representing, presumably, the future of American food. So theme-adjacent!

Later, there is always some form of entertainment. In 2019, it was Cher doing ABBA as well as her own hits. This year a Broadway-inspired performance may ensue, just to cap off the New York-is-back-and-full-of-talent message.

Q: So why does it matter?

A: It’s reality TV at its most glamorous, the All-Star Game of Entrances. And let’s be honest with ourselves: We could all use a little live entertainment after the last year.

For the best view, tune in to our red carpet slideshow, produced in real time as soon as the hosts make their entrance around 6 p.m.

(This article originally appeared in The New York Times.)

US To Donate 500 Million More Covid Vaccines To Other Countries

‘Intrusion’ Review: We’re All Trying to Find the Guy Who Did This

Netflix to Buy Roald Dahl Catalog, Adding ‘Charlie and the Chocolate Factory’ to Its Stable

Lessons from hiking Mt. Whitney with a spinal cord injury