Farmers to block railways if demands not met 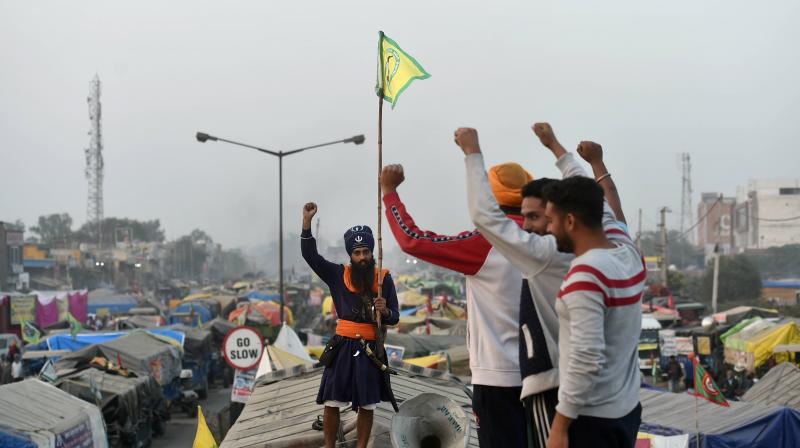 NEW DELHI: Not satisfied with the Centre’s offer to amend new agriculture laws, the farmers’ unions on Thursday said that they won’t relent on their demand of  “complete rollback” and threatened to block railway tracks across the country in coming days. It was despite agriculture minister Narendra Singh Tomar urging protesting farmers to consider the Centre’s proposals and said that he is ready for further discussions with them.

“We will block railway tracks if new farm laws are not immediately rolled back… We will decide on the date and announce it soon. The Centre has admitted that laws have been promulgated for traders. If agriculture is a state subject, the Central government does not have the right to make laws on it,” said farmer leader Balbir Singh Rajewal after agriculture minister Narendra Singh Tomar and food and public distribution minister Piyush Goyal invited farmers’ leaders for another round of talks. So far, the leaders have held several rounds of talks with the Central ministers.

The farmer leaders issued fresh threats to block railway tracks just a day after they had outrightly rejected the Centre’s draft proposal to amend the new farm laws. They had rejected a 20-page proposal offered by the Centre for it being “vague”.  The agitated leaders had announced to intensify their agitation by blocking highways from Saturday and by organising sit-in protests across the country on Monday. They had also threatened to gherao the residences and offices of the BJP leaders and ministers.

With the farmers’ protests entering 15th day, the agriculture minister said on Thursday that it was not right to escalate protests when talks were still on. He said, “The talks are still on. There is no breakdown. Farmers should express their views during the talks.”

Referring to farmers’ demand to repeal the farm laws, Mr Tomar said “no law is completely bad”. He said that the government is ready to discuss the specific clauses in the farm laws that the farmers think can hurt them. “We have sent them our proposal just on Wednesday and they have announced the next phase of agitation. This is not correct. I again appeal to them to withdraw their agitation and start discussions.”

In its proposal, the Centre had offered significant concessions including a written assurance on continuation of minimum support price (MSP)-based procurement and ensuring parity in transactions inside and outside existing Agricultural Produce Market Committee (APMC) mandis. The proposal had been sent a day after 13 farmer leaders met Union home minister Amit Shah.

Mr Tomar said that during his earlier talks with farmers’ leaders, many had said that the new laws were invalid as agriculture was a state subject and the Centre can’t frame these laws. “We clarified that we have the right to make laws on trade and explained it to them. APMC and MSP are not affected by it.”

The minister said:  “It is being projected that the land of farmers will be occupied by industrialists. Contract farming has been going on for a long time in Gujarat, Maharashtra, Haryana, Punjab, Karnataka but there has never been such an experience… Still, we have already made provision in the Act that agreement under these laws will only be between processors and farmers’ produce. There is no provision for any lease or agreement over farmers’ land.”

Mr Tomar said the Swaminathan Commission report came in 2006, but its recommendation about MSP at 1.5 times cost of production remained pending till the Modi government implemented it. He said: “Law provides that if a farmer and processor enter into an agreement and the type of crops is such that some infrastructure has to be set up on the farmer’s land, then the processor will dismantle this infrastructure from thereafter the agreement concludes… If the processor doesn’t do it, then the owner of that infrastructure will be the farmer himself. This has been provided in the law.”

MEXICO CITY—The U.S. warned Mexico it had imperiled the sharing of information on the country’s

Wilmington 1898: When white supremacists overthrew a US government

Wilmington in 1898 was a large and prosperous port, with a growing and successful black

Are women let down by period trackers?

Millions of women use apps to track their menstrual cycle, but many say they do

The Instagrammers who worry Iran

From “extreme” selfies to dancing to pop – the fun posts considered a crime. Source

How Gambia is grappling with gruesome past under Yahya Jammeh

Netflix’s Crash Landing on You put Son ye-jin’s strong female character front and centre, while Itaewon Class touched on racism: the K-drama themes from 2020 we hope to see more of this year