In the final showdown of this mini-tournament, Germany were finally made to pay for their imprecision at both ends of the pitch.

“We simply have to score goals. I felt like tearing my hair out today,” Voss-Tecklenburg said afterwards.

After both sides had beaten Belgium — the third nation in this series of friendlies between three countries’ bidding to host the 2027 World Cup — the stage was set for the most anticipated game.

Unaided by the absence of talismanic centre-back Marina Hegering (muscle problems), Germany’s cohesion suffered as a back four with three new faces struggled to gel.

The Dutch attack offered a stark contrast. Voss-Tecklenburg had warned beforehand of the Dutch’s well-established rhythms, and proof came in the form of Jackie Groenen’s opening goal. Vivianne Miedema charged deep into the box to collect a through ball, before finding her unmarked teammate with an instinctive no-look lay-off.

While the hosts celebrated Groenen’s finely struck first-time finish, their guests gawped at each other, waved their arms, and exchanged views about exactly who was at fault. 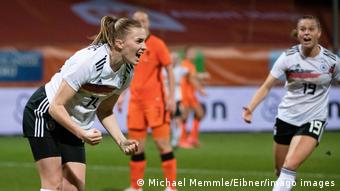 Laura Freigang got Germany level but it didn’t last long

Level, but not for long

The Dutch might have been favorites, but this Germany team is no stranger to itself. Experience and form got them back in the game. Svenja Huth perfectly picked out the run of Laura Freigang, who scored her fifth international goal in her fourth international appearance.

The equalizer had arrived against the run of play, and it enlivened the guests, who carried their momentum into the second half. But then it was the home side’s turn to strike a surprise blow.

German right-back Sophia Kleinherne gambled with possession on the halfway line and lost, inviting a ruthless Dutch attack. Merle Frohms did her best, deflecting Jill Roord’s shot onto the bar, but Danielle van de Donk mopped up the rebound.

There was no answer from Germany, who were wasteful going forward, once again failing to make their pressure count. Klara Bühl had several clear-cut chances to bring her team level, but the score remained unchanged.

“[Klara Bühl] also has matches where she has two chances and scores two goals,” said Voss-Tecklenburg afterwards. “I’m sure there’ll be games in the future where she’ll find the net again, rather than just hitting the goalkeeper or blasting it over.”

Germany might have got away with poor composure in front of goal against Belgium, but it was always going to be a different story against the Netherlands. Their inability to level the scores meant they suffered their first loss since the 2019 World Cup.

In the Netherlands, Germany finally met the world-class opponent they had long been thirsting for. This was the genuine test that their most recent fixtures have been unable to provide, and based on the scoreline, it wasn’t a test they passed. The question is whether Voss-Tecklenburg’s team can learn the necessary lessons in order to stand a serious chance of competing for titles in the future.