Bayern Munich slipped to defeat at Holstein Kiel on Wednesday night, losing on penalties in what was the most significant result in the history of their second tier opponents.

Under coach Ole Werner, the youngest coach in any of Germany’s top three divisions at 32, Kiel exposed Bayern’s soft underbelly and revealed weaknesses that other teams will now look to exploit.

But how serious are Bayern’s problems? The defeat was dismissed by Thomas Müller as “definitely not the best period for us” and while Bayern are indisputably the best team in Germany, alarm bells are starting to ring for Hansi Flick’s side.

Jonas Hofmann was twice the beneficiary, with Rose explaining the strategy after the game: “With the ball we wanted to send Hofmann past Bayern’s last line and have [Lars] Stindl a little deeper to play the pass.”

“We were punished for unnecessarily losing the bal three times, but we also need to protect the areas in behind,” admitted Flick. But it would appear that teams are starting to identify Bayern’s Achilles Heel.

On Wednesday night, Holstein Kiel equalized in similar fashion to Gladbach, Fin Bartels latching onto a ball over the top of Niklas Süle.

“Of course we have watched Bayern’s last few games, but it’s one thing to see it, and quite another to do it,” said Kiel boss Werner.

Sane not the same

His recovery from a serious knee injury was always likely to hamper him at first, but Leroy Sane has nevertheless struggled to get anywhere near the form that made him such an important cog of Pep Guardiola’s Premier League-winning Manchester City team.

The 24-year-old may have temporarily restored Bayern’s lead against Kiel with a pin-point free-kick, but it was only his fourth goal in 13 games. Add a meagre four assists, and it’s a mediocre return by Bayern’s standards. Before Christmas, he even suffered the ignominy of being substituted after himself coming on as a sub in Bayern’s 2-1 win over Bayer Leverkusen, although all parties insist there were no hard feelings.

Bayern are good enough to paper over the cracks when they have someone like Robert Lewandowski spearheading their attack but, if the Pole is missing, Flick’s options are surprisingly slim.

Serge Gnabry is struggling to replicate last season’s form, while young talents such as Jamal Musiala and Joshua Zirkzee are still considered promising talents, rather than players Bayern can depend to defend their domestic and continental crowns. Indeed, Zirkzee was actually sent off during Bayern’s reserve team’s derby defeat against 1860 Munich at the weekend. Alphonso Davies shot onto the scene last season with a string of stunning performances that made the football world take notice of his talent. At 19, his blend of pace, skill and power made him one of the best players in the world in his position.

While he still has all of those things and will undoubtedly enjoy a long career at the top of the game, his development has clearly stunted since the highs of last season.

Injury suffered in late October sidelined him for six weeks, but before and since that the Canadian has struggled to reach anywhere near the heights of last season, without a single goal or assist to his name this season. Davies is still young and he announced himself so explosively last season that expectations are high, but at the moment he is playing a long way short of his ability level. 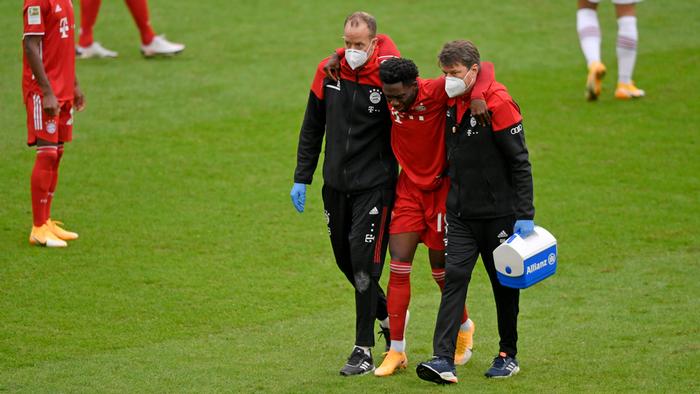 One of Bayern’s biggest issues is one that is bubbling under the surface. The club have been unable to strike a deal with David Alaba and relations have soured to a point where the Austrian captain, one of the most experienced and versatile players in the world, is set to leave the club in the summer when his contract expires.

Bayern are already moving to sign a replacement, the surprise acquisition of Reading’s Omar Richards, but Alaba can play all over the field and losing a player that has been synonymous with Bayern’s extraordinary period of dominance in Germany would be a huge blow.

Particularly so soon after the departure of another Bayern stalwart, Thiago Alcantara.

It’s probably impossible to replace Thiago like for like, with few players possesing the Spaniard’s coolness and vision. The same applies to Philippe Coutinho who, although he wasn’t a first choice starter, undoubtedly represented a world class option off the bench, the sort of strength in depth that Bayern expect of themselves.

Their replacements, Eric Maxim Choupo-Moting, the returning Douglas Costa and Marc Roca, who missed the crucial spot-kick in Kiel, are quite simply not the same standard of player, while Bouna Sarr, a surprise arrival from Marseille, has also struggled.

Suddenly, with Jerome Boateng, Javi Martinez and Thomas Müller all growing old together, there are indications that Bayern’s talent pool isn’t as deep as it was even six months ago.

And with even Bayern Munich not totally unaffected by the coronavirus crisis, there’s little indication from Säbener Straße that the club intends to reenter the transfer market.

Max Verstappen is a BETTER driver than Lewis Hamilton, according to Red Bull boss Christian Horner