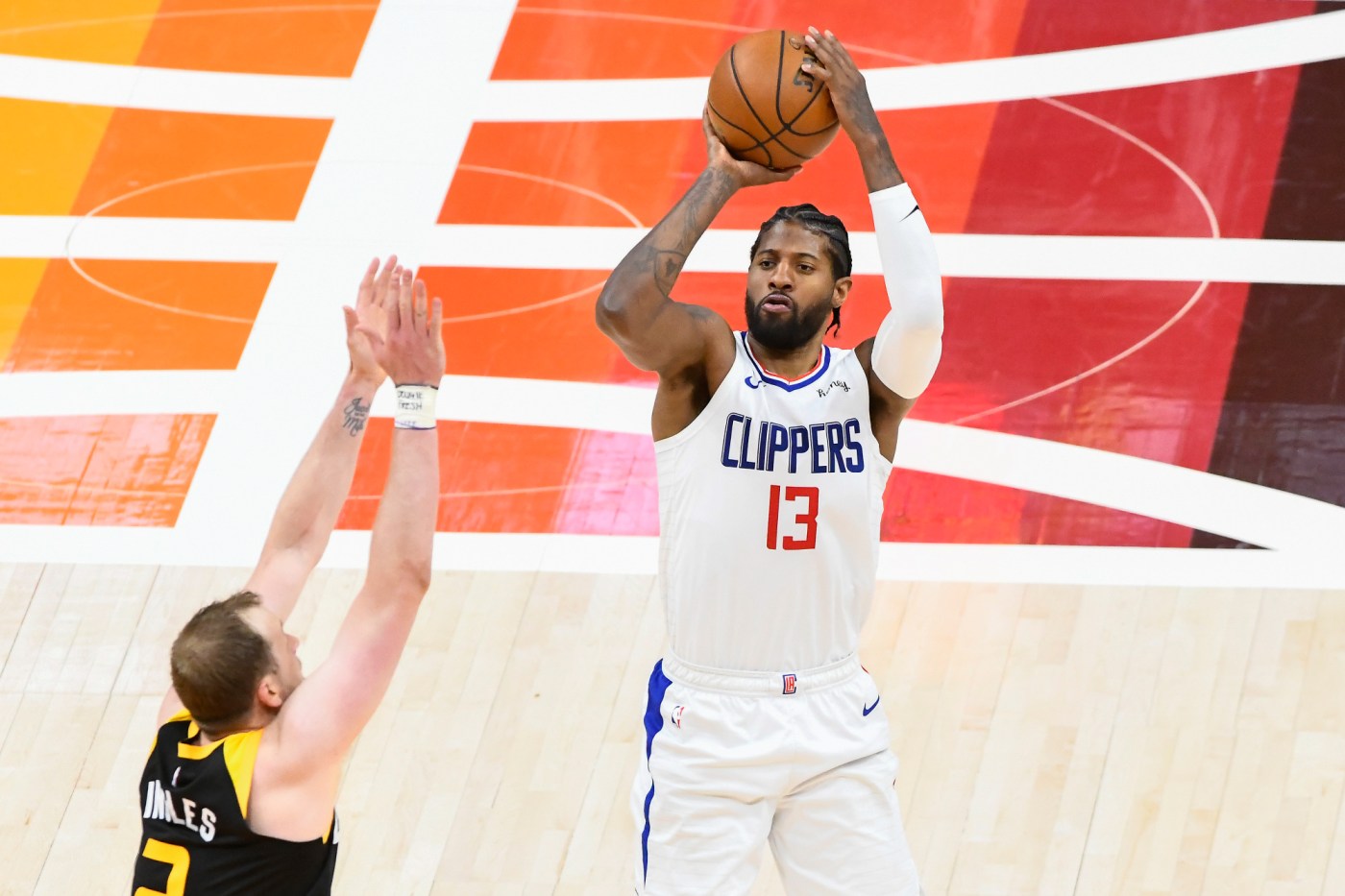 SALT LAKE CITY — After playing in empty or near-empty arenas for the past year, the sound of 18,007 people telling you – loudly and in no uncertain terms – that you’re “Over-rate-ed! Over-rate-ed!”? It’s actually pretty cool, said Paul George.

“Yeah, I mean, I like it,” said the Clippers’ seven-time All-Star after Tuesday’s loss at a sold-out Vivint Arena, where he shot just 4 for 17 from the field but went 9 for 10 from the free-throw line, where he was serenaded with enthusiastic disparagement.

George was quick to self-critique Tuesday, identifying ways he thinks he can be better in Game 2 on Thursday.

George matched his playoff low with 20 points, but 13 of those came in the fourth quarter when he helped keep hope alive – despite trailing by as much as 10 points in the second half, the Clippers had an opportunity to tie the game with 15.9 seconds to go.

“We just continue to give ourselves chances, I think that’s the positive,” said George, who is averaging 23.1 points per game – and a team-best 7.4 points per fourth quarter these playoffs, shooting 47.5% in the final period.

“That terrible third quarter to start the half, up, what, 13? And we just came out flat. They are playing desperation ball the whole night, and you know, we didn’t match it until late. But I think the positive out of it is we gave ourselves a chance; regardless if we gave this one up with a flat third, still gave ourselves a chance to win this.”

Tyronn Lue spun the wheel and landed on all sorts of unexpected lineups in the first half of Game 1 – though his choices were calculated, he said, and not as random as they might have seemed.

The Clippers coach started with the same small-ball five with whom he finished the Clippers’ first-round series against Dallas: George, Kawhi Leonard, Marcus Morris Sr., Reggie Jackson and Nicolas Batum.

Then he turned to 7-foot center Ivica Zubac, at the 6:28 mark of the first quarter, and after that, to Luke Kennard, Rajon Rondo, Terance Mann. He also summoned Patrick Beverley for the first time in three games, if you take away an 11-second appearance in Game 5 against Dallas, and to DeMarcus Cousins for the first time all postseason.

Lue said he wanted to conserve his players’ energy, especially coming off a grueling seven-game first-round series, noting that he wanted “just to see where we’re at and get our legs up under us. We didn’t want it wear guys out early on in the game, and I thought our bench guys came in and did a great job.”

The Clippers’ reserves outscored Utah’s 27-11 in the first half.

Lue’s late-game personnel looked different too. Rondo – who clocked 28 minutes, the most he’d played these playoffs – stepped in at point guard when Jackson fouled out with 6:13 to play, adding a ball handler to the mix if not a gravitational offensive threat (Rondo took one shot and had one assist in 9:14 of fourth-quarter run).

“That’s what I thought was right for our team,” Lue said postgame when asked why he went with Rondo instead of Mann down the stretch. “Because without Reggie on the floor, we needed a point guard on the floor, so that’s what we did.”

It’s not exactly breaking news, but it is history: The Jazz, who are not shy from 3-point range, have made at least 17 3-pointers in each of their past five playoff games (all wins). That includes going 17 for a postseason-high 50 on Tuesday, when Donovan Mitchell and Jordan Clarkson made six 3s apiece. Utah’s streak is two games longer than any other team in NBA postseason history.

What’s more: In Game 1 against the Clippers, who shot 16 for 42 on Tuesday, the Jazz’s 17th 3-pointer was the difference in their three-point victory.

Handstands – their health and fitness benefits for you, from improved core strength to inner peace

Premier records not in competition with any label, says Odiong