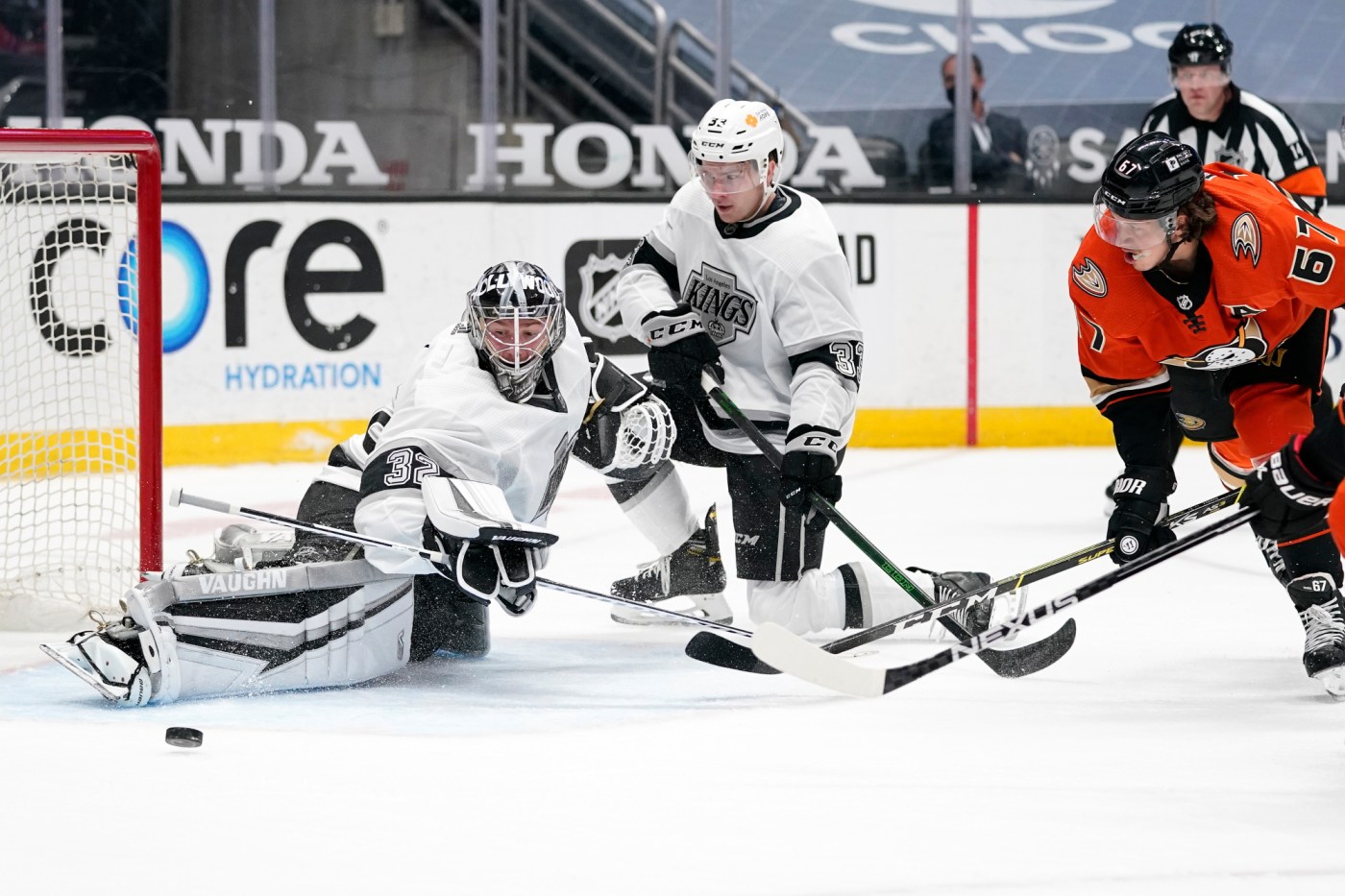 ANAHEIM — Jonathan Quick dived to his left and sprawled to his right and crawled on his stomach and fell on his back and thrust his blocker into the air and raised his glove and did all he could do to keep the Kings in the game Friday at Honda Center.

The Ducks fired pucks from here, there and everywhere.

The Kings would have been lost without Quick.

The 35-year-old put on a vintage goaltending performance that overshadowed a couple of rookie centers bent on working their magic with the puck on their sticks. In the end, the Kings pulled off a 2-1 victory they had no business taking.

Quick’s play kept the Kings within striking distance long enough for Lias Andersson to tie it 1-1 at 14:56 of the third period. The Kings might have faced a far larger deficit if not for Quick. Andersson converted after the Kings generated sustained pressure at long last.

Anze Kopitar then put the Kings ahead 2-1 at 19:54, faking out Ducks goalie John Gibson and depositing the puck behind him.

Gibson didn’t have nearly the workload Quick did, particularly during a second period in which the puck seemed to be consistently within close range of Quick’s net. The Ducks dominated for extended stretches but failed to pad a 1-0 lead because Quick wouldn’t let them.

It was that simple.

The Ducks outshot the Kings 19-6 in the second, but they couldn’t beat Quick.

Gibson made 23 saves by game’s end.

Haydn Fleury gave the Ducks a 1-0 lead with a slap shot from the perimeter that eluded Quick at 5:37 of the first period. Rookie center Trevor Zegras won a faceoff cleanly from the Kings’ Jaret Anderson-Dolan, sending the puck back to the left point to Fleury, who sent it flying past Quick.

Kings teammate Tobias Bjornfot didn’t do Quick any favors by screening him.

The goal was Fleury’s first since the Ducks acquired him April 12 from the Carolina Hurricanes in exchange for Jani Hakanpaa, a swap of defensemen. Fleury assisted on Sam Carrick’s goal in a 3-2 win Wednesday over the Kings for his first point with the Ducks.

Ducks coach Dallas Eakins paired Fleury, 24, with Jamie Drysdale, 19, a leap of faith that was rewarded with Fleury’s first-period goal and some remarkable quarterbacking on a second-period power play by Drysdale.

Getzlaf was scratched in order to rest up for Saturday’s home finale, which also will be goaltender Ryan Miller’s Honda Center farewell. Miller announced Thursday he would retire at the end of the season, after 18 years in the NHL, the final four with the Ducks.

Henrique was sidelined because of the league’s COVID-19 protocol. He is expected to rejoin the Ducks next week for their final four games.

Kings coach Todd McLellan abandoned the 11-forward, seven-defenseman lineup he used in the past two games against the Ducks in favor of the traditional alignment of 12 forwards and six defensemen Friday.

Rookie center Quinton Byfield played his second NHL game after making his debut Wednesday. McLellan didn’t hide the 18-year-old, who was the second overall pick in the draft last fall. Byfield was around the action at both ends of the ice. Byfield played on the Kings’ power-play and penalty-killing units.