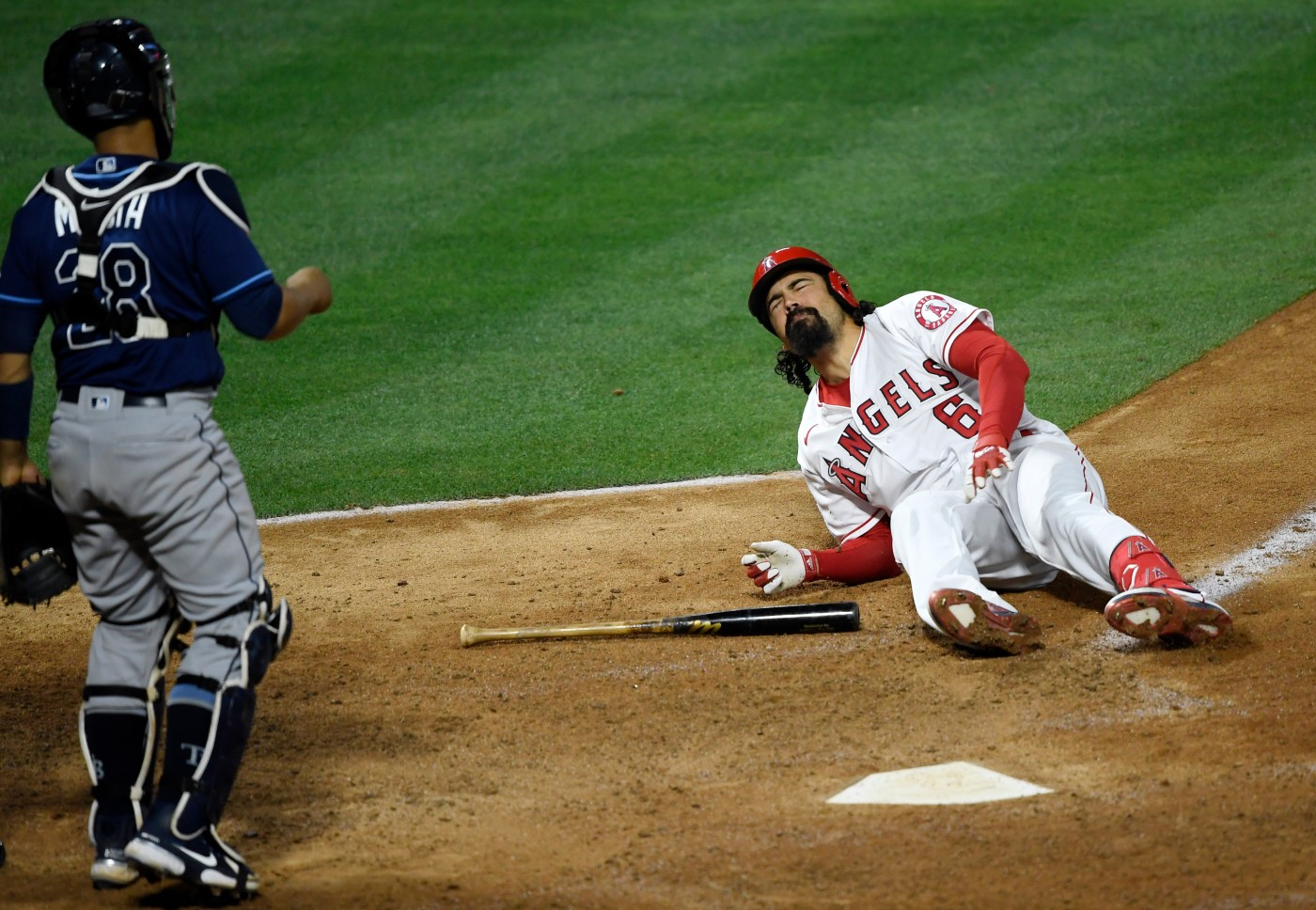 ANAHEIM — The numbers didn’t add up for José Quintana in the Angels’ 7-3 loss to the Tampa Bay Rays on Monday night.

Quintana got off to an electric start, striking out five of the first six hitters, and he finished with nine strikeouts and just one walk. In between all that, though, he still managed to give up five more runs and get knocked out in the fourth inning, another disappointing performance.

“Bad luck is the only luck this guy’s got,” Maddon lamented.

Meanwhile, the Angels are hoping to get lucky with Anthony Rendon, who fouled a ball off his left knee in the eighth inning and suffered a contusion. X-rays were negative, giving the Angels hope that Rendon may only miss days, instead of weeks.

Maddon said when he first saw the way Rendon was writhing on the field in pain, eventually needing to be helped back to the dugout, “it did not look good.”

Rendon was just starting to heat up — he hit a homer earlier in the game — in the week he’d been back after missing two weeks with a groin injury. Obviously, it would be a difficult blow for the Angels lineup and their defense if Rendon misses any significant time.

His injury put a worrisome cap onto a frustrating night for the Angels and Quintana, who like his manager was puzzled by the results of this outing.

“I felt really good today,” Quintana said. “It’s really bad when you have games like that… Things are going to be good. It’s going to be really soon. It’s a really tough night when you feel great and have a lot of strikeouts and you don’t have a game that’s good for your teammates.

“It’s bad. But my confidence is up. I feel better than the last couple times. I executed my pitches better.”

Nonetheless he raised his ERA to 10.59, the highest in Angels history for anyone with at least 15 innings in his first five games with the team.

“I know it’s difficult to defend and people are not going to understand, but from where I was standing he threw the ball well,” Maddon said. “He’ll be back out there soon. I just want to see him keep throwing the ball the way he was.”

After Quintana’s previous outing, Maddon said he was puzzled by his struggles because when they’d been together with the Chicago Cubs, Quintana was generally effective when his velocity was where it’s been with the Angels.

That seemed to be prophetic on Monday night, as Quintana came out of the gate throwing 91-92 mph and slicing through the Tampa Bay lineup.

That encouraging number couldn’t overshadow what happened after the second inning, though.

In the third, Quintana gave up a leadoff single to Francisco Mejia and then a double to Wily Adames. After a strikeout, he walked Randy Arozarena to load the bases.

Mike Brosseau singled just off the glove of shortstop David Fletcher, to drive in two. An out later, Yandy Diaz dropped a broken-bat single into left to drive in another.

There was hard contact too. Manny Margot drilled a hard single up the middle to finish the scoring in the third, and Adames blasted a 446-foot homer in the fourth.

James Hoyt picked up the next three outs after Quintana was done, and then Patrick Sandoval got a chance to audition if the Angels decide to remove Quintana from the rotation.

Sandoval got six outs, with four strikeouts, in the fifth, sixth and seventh innings. He also walked two, again demonstrating one of the issues that has prevented him from finding consistency in his few starting opportunities.

While Sandoval was in the game the Angels made it interesting with a pair of home runs in the sixth. Shohei Ohtani’s two-run blast and Rendon’s solo homer cut the deficit to 5-3.

Ohtani, who was scratched as the starting pitcher from Monday’s game because he was hit by a pitch on Sunday, tied four other players for the major league home run lead with his ninth.

CDC Says Kids As Young As 12 Should Get The Pfizer COVID-19 Vaccine : Coronavirus Updates : NPR

Michelle Obama on depression: ‘Don’t wallow in your low’