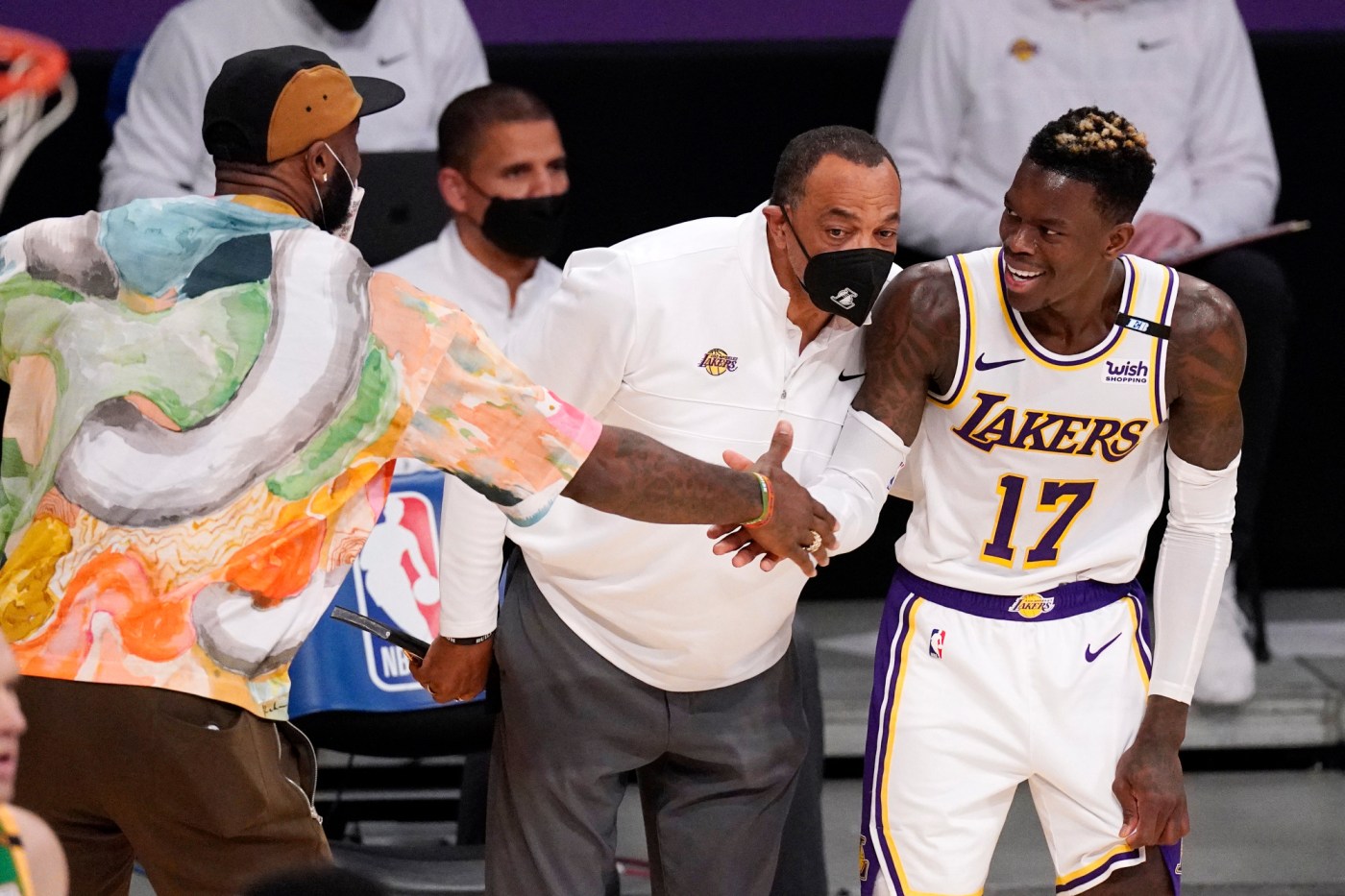 There’s no time to be picky about wins. Certainly not at a time that the Lakers – whose starting lineup is a fill-in-the-blank adventure from night-to-night – are facing right now.

The Utah Jazz presented the Lakers with a golden opportunity for a Saturday matinee victory, but it took a nail-biting regulation finish and overtime to pull it out, 127-115.

While Andre Drummond led the team with 27 points, it was Dennis Schröder who starred at the finish – scoring 25 points, including the game-tying bucket, and adding 8 assists.

A tie dye-clad LeBron James was on the sideline cheering them along, mimicking finger pistols to celebrate a 3-point play by Kentavious Caldwell-Pope, and dapping up a grinning Schröder, who wasn’t a lock to play until a half-hour prior to the tip. He had spent the previous few days nursing a cut between his toes on his right foot that had gotten infected, and with the help of his wife had nursed it gently back to health.

With his team showing that kind of grit, coach Frank Vogel said, he’s willing to give them a break for letting the game get close.

“I prefer not to lose lead and just to secure the game,” quipped  Vogel. “But there’s positives in every situation like that. To have a team storm back into a game and take the lead the way they did, and to not panic, is definitely something we can draw on going forward.”

The Lakers led by as much as 14 points early in the fourth quarter, but instead of finishing with killer instinct, they started gambling the game away. Turnovers piled up, five in less than five minutes, and in a flash, the hot-shooting Jazz closed the gap to a point. The Lakers went 6:27 during the fourth quarter without a point.

Schröder presented some late instant offense to keep the Lakers from going under in regulation: In the final two minutes, he drove in for a lay-up and launched a short jumper to give the Lakers a bit of breathing room. When Jordan Clarkson (27 points) hit a go-ahead 3-pointer for the Jazz, Schröder darted inside for the tying lay-up with 3.5 seconds left to send the game to overtime.

The game-tying lay-up was against Ersan Ilyasova, the early sharpshooter filling in at center. Schröder was familiar attacking Ilyasova off the dribble from his early Atlanta years.

“Coach was like, ‘Just come off of screens and try to attack him,’ and that’s what we were trying to do there,” he said. “Even putting Jordan Clarkson in the pick-and-rolls and then try to make the right play. I think it worked out pretty well and yeah, we got the win.”

The Lakers dominated overtime, outscoring the Jazz 17-5 in a runaway result – sending the streamers down from the roof of Staples Center as fans reveled in a home victory for the first time this season. Each of the Lakers’ starters scored in double-figures, including Caldwell-Pope (25 points) who was perhaps the team’s best two-way player.

One of the best 3-point shooting teams in the league still thrived from the perimeter without Donovan Mitchell, Mike Conley, Rudy Gobert or Derrick Favors. Ilyasova capably stepped in as Utah’s go-to scorer, nailing six of his first seven 3-point attempts, and the team finished with 23 total 3-pointers.

But the Lakers stacked a 64-38 advantage in the paint. Drummond led the Lakers with six points in the OT period, including a pair of free throws; it stood out that the notoriously iffy free throw shooter was 7 for 8 from the line in a tight game.

But the center (making his return from a reaggravation of his toe injury) was most conspicuous running the floor for transition baskets, which helped spark the Lakers’ 29-20 third quarter edge. Against Utah’s center-less lineups, Drummond managed to hold his own wrapping up with two steals and a block. After one of his end-to-end buckets, assistant coach Phil Handy caught a winded Drummond on the sideline when the Jazz called timeout.

The Lakers are likely to have at least one more shorthanded game without either of their top two stars: While Anthony Davis has been cleared for more on-court work, Vogel reiterated that he’s unlikely to play Monday against Utah, who could return Conley, Gobert and Favors to the lineup (Mitchell is ailing with an ankle sprain).

But the Lakers are 7-8 without either star, which bodes well for what they’ll look like when fully armed.

“We’ve got a lot of guys that were on the team last year that won the championship;That D.N.A. we just use it every game,” said Markieff Morris. “Some games, we’re going to lose. The fact of the matter is, we’ve got to continue to play hard. We know what’s coming, preparing ourselves for the playoffs. We know it’s time.

“And we know from here on out,” he added, “everything counts.”