It was no surprise the German giants came to strut around the Stadio Olympico as if they owned the place.

Who can blame them? An aggressive attack-enforced mentality woven with the likes of Robert Lewandowski and Leroy Sane in attack was always going to be a tricky ask.

The Italians learnt the hard way here. Bayern at their attacking best and Lazio close to their defensive worse was always going to be a destructive recipe. 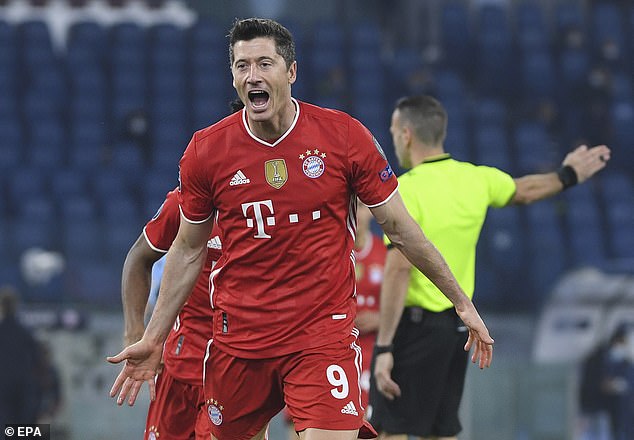 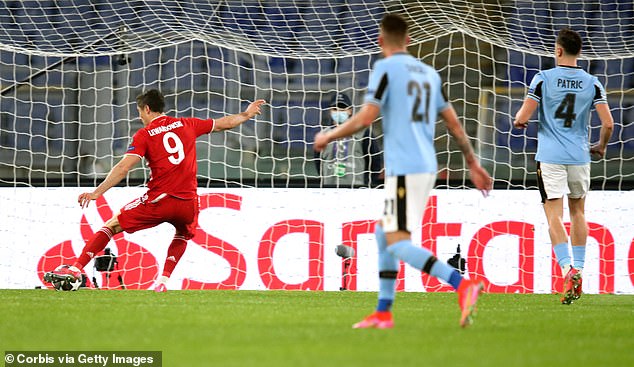 Three of the goals were from defensive errors — a tame Mateo Musacchio back-pass presented Lewandowski his 72nd Champions League goal above Raul in the all-time goal rankings in the competition and opened the floodgates.

Sane capitalised off a Patric slump to the ground and Francesco Acerbi turned into his own net off a Sane cross.

Joaquin Correa pulled one back with 41 minutes to go to begin a spirited venture down field but the mountain had already peaked.

Though sandwiched between the mistakes was a impetuous guided finish into the corner by 17-year-old Jamal Musiala.

It’s a name we will be hearing more in the coming years. A decimated substitute bench due to Covid and injuries left Hansi Flick giving the teenager a twirl in midfield in a knockout fixture.

He looked so assured on the ball and not out of place in among the talent to his left and right.

Musiala qualifies for England but it looks as if the youngster will opt to play for Germany. If Gareth Southgate was watching, he will surely be scurrying for a flight to Munich in hope of turning his head the other way.

Bayern’s absentee crisis was reflected with just five substitutes of an allocated 12 on the bench. Benjamin Pavard and Thomas Muller were out due to Covid, while Corentin Tolisso, Serge Gnabry and Douglas Costa made up part of the injury list.

Though the Germans started in a confident fashion and took the lead with just nine minutes on the clock. 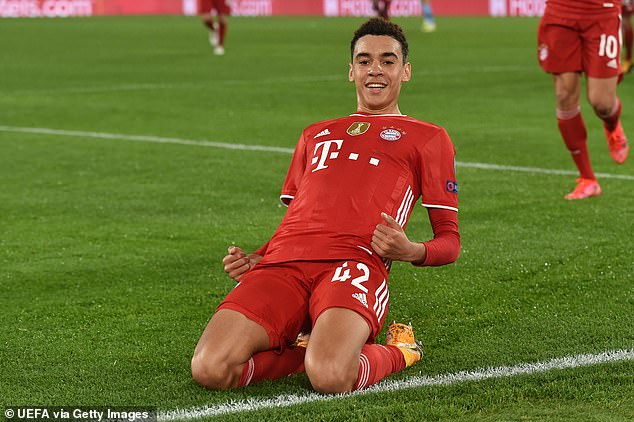 Jamal Musiala added a second for the Germans, linking up with midfielder Leon Goretzka 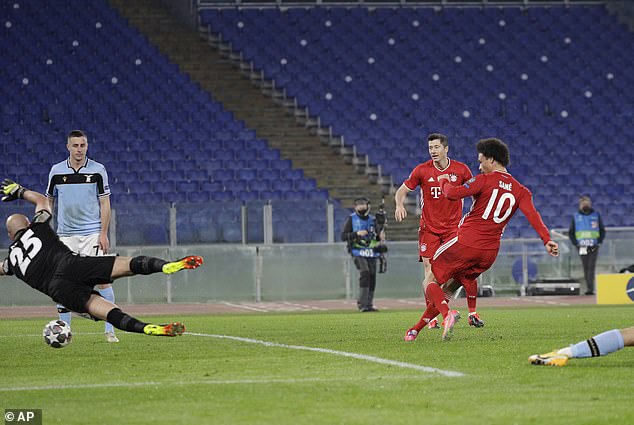 Musacchio pondered far too long on the ball, and then unleashed an awful back-pass for Lewandowski to capitalise on.

He cut the ball from right foot to left as goalkeeper Reina came sprawling out to guide into an empty net.

At this point Lazio were neither surprised nor gutted. A man with 31 goals in 30 games this season needs no gifts, and a goal was inevitable at that point.

Joshua Kimmich and Niklas Sule both had threatening crosses closely squandered minutes earlier in a spate of attacks forward.

10 minutes after the goal, the Italian side’s spirit has started to grow. A scoring battle-off with Bayern is often what is expected. A goal down is no tragedy.

But that unravelled quickly, as Sergej Milinkovic-Savic neatly chested the ball down on the edge of the area and glided in on goal past two defenders. 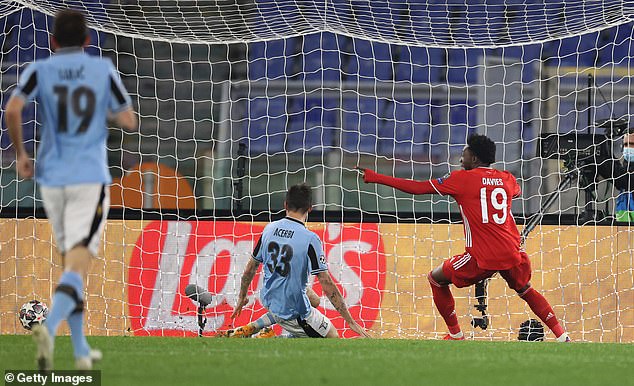 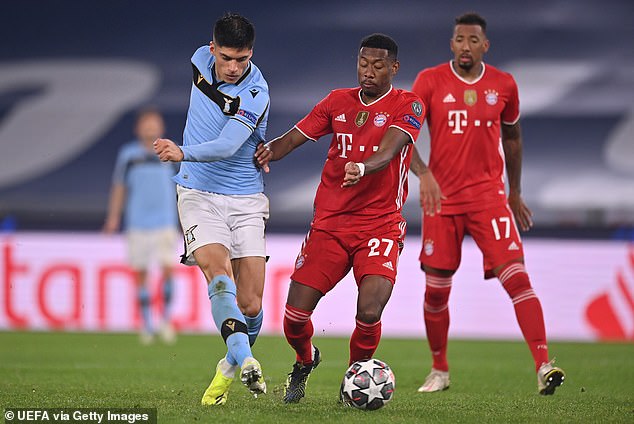 Well, until he was upended on the edge of the area by Jerome Boateng. Luckily for the Germans, VAR spotted the midfielder offside in the build-up.

The away side don’t take to threats kindly and went up the end to double their lead.

Leon Goretzka neatly passed to Musiala in space just outside the area, and he darted a right-footed strike snug into the bottom left corner.

A third followed three minutes before the interval after another Lazio defensive mishap — Patric falling under pressure this time — allowed Kingsley Coman to bomb forward and shoot, with his rebound finished by Sane.

The Italians were already facing an insurmountable mountain before the second half started, but Bayern were still keen to leave foot on throat after the restart.

A corner for Lazio invariably meant nine men forward in search for a breakthrough. It was positive but a little too ambition against this juggernaut as Sane broke with terrific speed down the left-hand wing, jinking in and out against a desperate Lulic.

His cross was turned into the net by the opposing Acerbi into his own goal under pressure from Alphonso Davies.

The four-goal tide would lead some sides to surrender, but to Lazio’s credit, a burden fell. Embarrassment was already on the card — what more is there to lose?

A free-flowing displayed followed; how they will wish they approached the fixture in this vein originally.

Correa, a shining light in their attacking ranks, prodded and probed and crucially, awarded a goal on 49 minutes after dribbling past both Sule and David Alaba to beat Neuer one-on-one.

By the point, Bayern had taken their foot off the pedal in hope of walking into a sedate second leg with no more injuries.

Jaunts by the lively Correa and Milinkovic-Savic raised scant hopes, but the Italians left knowing the levels between the two sides were far wider than most would have expected.

Millions Of Kids Learn English At School. Teaching Them Remotely Hasn’t Been Easy

Pufferfish blink by pulling in their eyeballs and puckering their skin