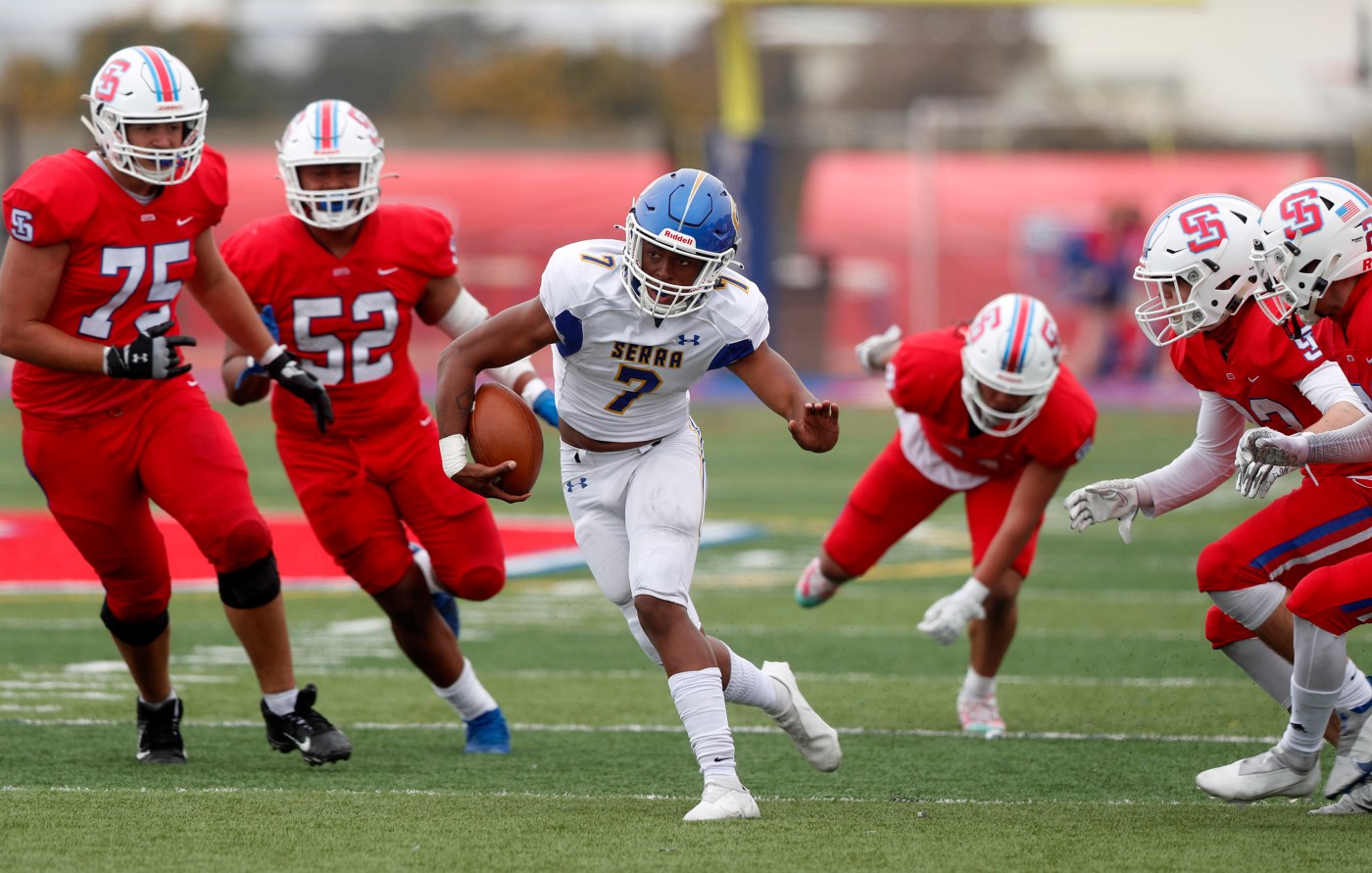 There was going to be no repeat of the upset that ended last season. In the first half, Serra’s defense made sure of it. And in the second, the Padres’ offense exploded to put away St. Ignatius (3-1).

The Serra (5-0) defense forced six turnovers and its offense was eventually able to capitalize on the scoreboard in the second half in a 34-3 win to cap a 5-0 season for the Padres, who entered the final week of the season ranked third in the Bay Area News Group Top 25.

Senior linebacker Fynn Williams put a bow on the blowout with an interception and a 58-yard return for a touchdown, the Padres’ fourth touchdown of the second half.

“In the offseason, during the pain, he was always there leading the team,” coach Patrick Walsh said. “It was very fitting to see him pick that ball and run it into the end zone.” –Evan Webeck

READ MORE: Photos and more in our game story

Mitty clawed back late but came up just short on a game-tying two-point conversion and fell to Bellarmine 26-24 in this WCAL nail-biter.

Bellarmine (2-2) led by as much as 26-10 in the fourth quarter after defensive back Adam Hayashi intercepted a pass and quarterback Tommy Anderson connected with Nicho Domine for a 96-yard touchdown. But after an Ian Collier touchdown reception with five minutes remaining, the Monarchs (0-3) had a path to tie the game up.

Bellarmine turned the ball over on downs with 2 minutes remaining, then sophomore Danny Scudero caught his second touchdown pass of the game for Mitty, pulling the Monarchs within two with a two-point try to come. However, they couldn’t turn the potential game-tying conversion, and Bellarmine recovered Mitty’s onside kick to seal its second and final win of the season.

The Monarchs took an early lead, putting up 10 in the first half on a field goal and Scudero’s first touchdown reception in the first half. But with 6 minutes remaining in the second half, Bellarmine running back Jaxon Sawyer rushed for a seven-yard touchdown, and the Bells tied the game up 10-10 on a field goal. Bellarmine continued its roll into the second half with Anderson’s first of two touchdown connections with Domine, from 28 yards out to give the Bells a 17-10 lead. Mitty intercepted a pass to its own 1-yard line, but ended up getting burned when Bellarmine answered with a safety to make it 19-10 heading into the decisive fourth quarter.

“Tough way to end the year,” Mitty coach Danny Sullivan said. “Proud of my kids for everything they have dealt with this year.” –Shayna Rubin

A brotherly connection was all Salesian would need to beat St. Mary’s-Berkeley Saturday afternoon, and for a while, it was all it had.

Quarterback Nick Fontanilla found his brother, Don Fontanilla, for a touchdown to give the Pride an early 7-0 lead.

The score remained that way until the third quarter, when running back Devin Quinn broke the drought with a touchdown scamper.

The quarterback Fontanilla got in for Salesian’s third and final score on a sneak play, wrapping up a 21-6 victory.

Salesian finished its season with three consecutive wins, while the loss was St. Mary’s third in four games this season. –Evan Webeck

El Camino raced to a 21-0 first-quarter lead en route to a one-sided victory. The Colts finished the abbreviated season 2-2 and should have some momentum going into the fall. They won their last two games, and their defeats to Peninsula Athletic League-Lake Division leaders Carlmont and Sequoia were by a total of 16 points.

Elijah Vasquez got the scoring started for El Camino with a 30-yard pick-6, then Jared Turcios slipped into the end zone from 4 yards out to make it 14-0. Toby Woodworth capped the opening period by returning a punt 85 yards for a touchdown.

South San Francisco (0-4) closed the gap to 21-6 when receiver Carlos Marquez caught a 27-yard touchdown pass, but it was all El Camino after that.