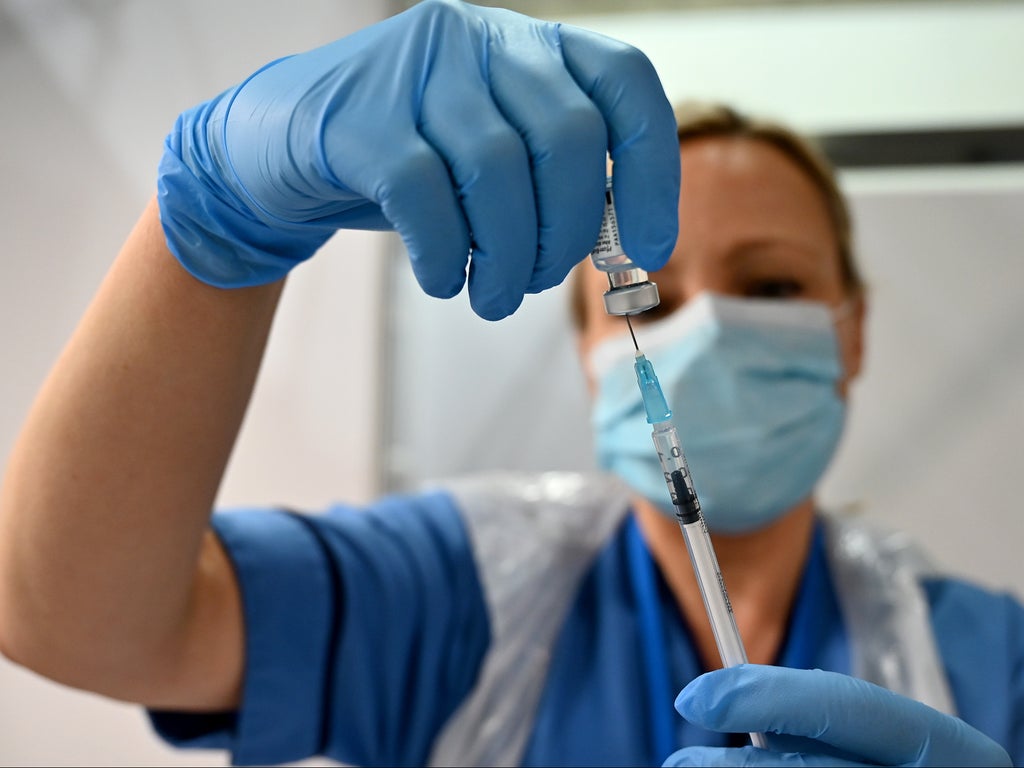 More than 30 million people are to be offered a Covid booster jab as part of government plans for “living with the virus” throughout the winter.

Following final recommendations provided by the Joint Committee on Vaccination and Immunisation, all over-50s, clinically vulnerable individuals and healthcare workers will be offered a third dose of the Pfizer or Moderna vaccine in the weeks ahead – regardless of what jabs they received earlier in the year.

Only those individuals from the top nine priority groups who have been fully jabbed for more than six months will be eligible for a booster. The Pfizer vaccine will be administered as a full dose, while the Moderna vaccine will be offered as a half dose due to supply constraints.

The Medicines and Healthcare products Regulatory Agency (MHRA) said the two mRNA vaccines are safe to use as boosters and well tolerated, while separate research has found that both jabs provide a high immunological response.

The MHRA has also given the green light for flu vaccines to be administered at the same as the Covid-19 booster jab. More than 35 million people are to be offered the vaccine as a nasal spray or jab amid fears of a resurgence in influenza cases this winter.

Dr June Raine, chief executive of the MHRA, said the administration of both the Covid and flu jab at the same time is safe and “does not affect an individual’s immune response” to either vaccine.

Senior health officials have said that the launching of a winter Covid booster programme, which starts next week, does not mean that top-up doses will be provided every six months. The JCVI will be tasked with determining whether boosters will be needed each year, though a decision on this is not expected to be made until next year.

Antibody levels have been shown to be waning in people who were vaccinated at the beginning of the year, though the vaccines remain highly effective at preventing hospitalisation and death.

Professor Wei Shen Lim, of the JCVI, said the recommendation of at least a six-month gap between the second jab and a booster shot was an attempt to find a “sweet spot”.

“Getting a booster dose too early might mean getting a dose when they don’t actually need to have vaccination because they still have a high level of protection,” he told a Downing Street press conference.

“And, as we have seen with the first and second dose, it may be that a longer interval to the third booster dose may actually be beneficial in the longer term.” However, he said, “we don’t want to wait too long.”

It’s hoped the booster programme will be completed by Christmas and will help to maintain high protection levels throughout winter, when cases are expected to increase as people spend more time indoors and the virus is given more opportunities to spread.

“We’re not past the pandemic, we’re in an active phase still,” said Professor Jonathan Van-Tam, England’s deputy chief medical officer. “This winter could possibly be bumpy at times.”

The JCVI has already recommended half a million vulnerable Britons receive a third vaccine dose. Anyone aged 12 or over with a weakened immune system – including patients with blood cancer, advanced HIV or who have had recent organ transplants – will be eligible for the jab.

For the wider public, research and clinical trials have shown that a third booster dose raises an individual’s antibody levels, but it is still unclear how much more additional benefit this will provide in protecting healthy adults against severe disease and death.

Senior government health officials have admitted they do not know what the effects of the booster programme will be on hospitalisation due to a lack of data, but have “every reason to believe that it’ll be good”.

Data released by the Office for National Statistics on Monday showed that there have only been 59 Covid deaths in the first six months of the year among people who were fully vaccinated and who weren’t extremely clinically vulnerable. There were a total of 51,281 Covid fatalities during this period.

On Monday, the head of the Covax Facility, the global vaccine-sharing initiative established to secure doses for poorer countries, told The Independent that the UK’s booster programme would be “counter-productive”.

She argued that the supplies set to be used among 30 million in Britain would be put to better use in protecting people in poorer countries who remain unvaccinated.

“The difference between giving a third dose to a healthy young adult or a first dose to an ICU worker or elderly or immunocompromised person in a developing country – clearly one has a higher benefit to it,” she said.

Professor Dame Sarah Gilbert, who helped develop the Oxford/AstraZeneca vaccine, has also said that a booster jab was not needed for the majority of people in the UK.

And a new study published inThe Lancet this week found that there is little evidence to suggest that protection levels against severe infection is waning in fully vaccinated people.

Sai Pallavi: Sekhar Kammula has dealt with caste discrimination in an organic way in Love Story