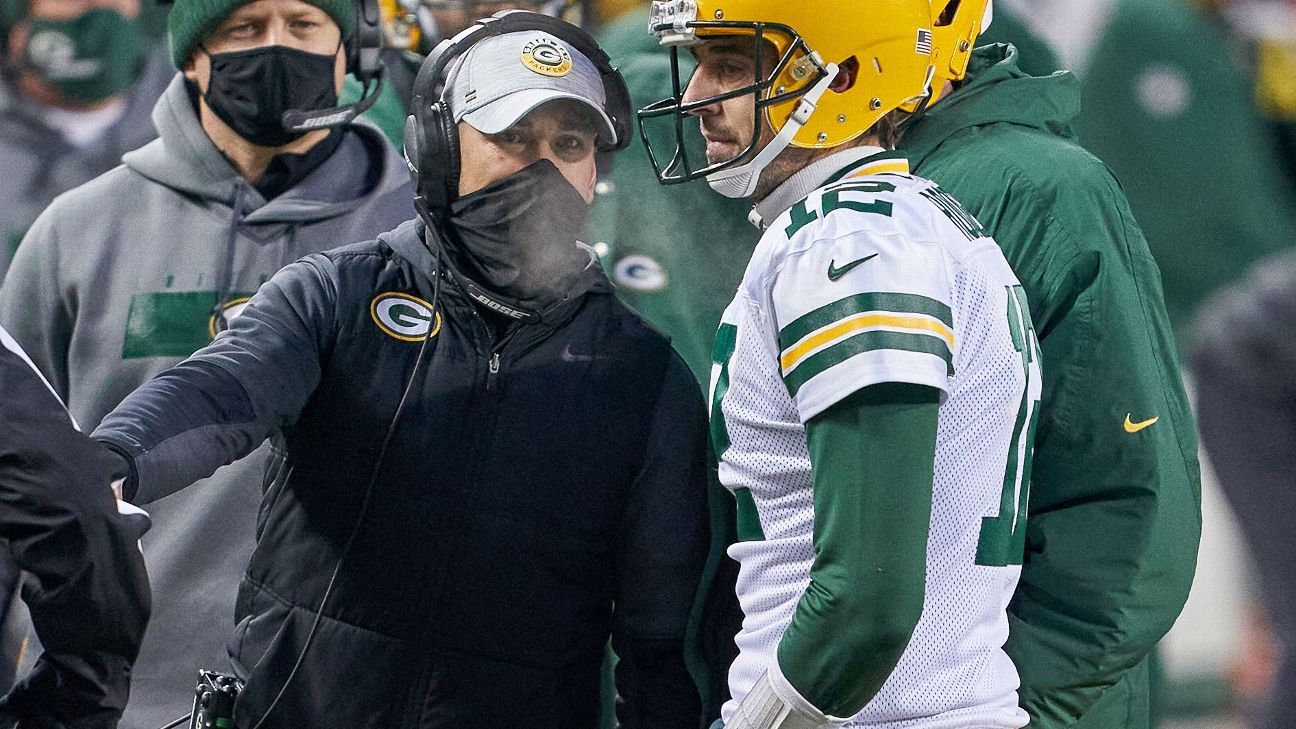 GREEN BAY, Wis. — Three days after the depths of Aaron Rodgers‘ disgruntlement with his team came to light, his coach over the past two seasons still “can’t fathom” the idea that the reigning NFL MVP would consider not returning to the Green Bay Packers.

Like Packers team president Mark Murphy and general manager Brian Gutekunst have said in the days since ESPN’s Adam Schefter reported the news on Thursday, Matt LaFleur was emphatic in his desire for Rodgers to return.

But the issue isn’t whether the Packers want Rodgers back but rather that Rodgers doesn’t want to return.

“Yeah, I know, and I can’t even take my brain to that spot right now,” LaFleur said Saturday following the conclusion of the NFL draft. “So I just want to do everything in my power to ensure that doesn’t happen.”

“I can’t fathom [him] not being in Green Bay,” the Packers coach added later. “That’s where my mind’s at. I don’t only love the player, but I love the person. I love working with him on a daily basis; I think we all do — from the players in that locker room to the coaching staff. Again, I don’t even want to let my mind go there.”

LaFleur would not disclose details of his recent conversations with Rodgers.

“I’ll always remain hopeful and optimistic, and certainly, we’ll always welcome him back with open arms,” LaFleur said. “He knows exactly how not only myself but our staff and our players feel about him. Like I said before, I just can’t imagine him not being in a Green Bay Packer uniform.”

At this point, Jordan Love is the only quarterback in the Packers’ virtual offseason program. It’s unknown whether Rodgers will attend the voluntary sessions when they turn to in-person work later this month, but he has typically been a regular participant in offseason programs and even has an offseason workout bonus ($500,000) tied to it.

The Packers did not draft a quarterback this weekend. Gutekunst said they discussed several veteran options before the draft and that they likely will sign at least one undrafted rookie quarterback, but he insisted the Rodgers situation has not been or will not be the impetus for that.

Love was the third-string quarterback last season as a rookie, and the plan was for him to be Rodgers’ top backup this season. In the meantime, LaFleur has tried to insulate Love from the distractions.

“I’ve talked to Jordan, and I told him, you know, there’s a lot of noise out there,” LaFleur said. “You can’t focus on that. You’ve got to focus on yourself. And I know you guys think it’s cliché, but he’s got to be the best version of him, and he’s got to do everything in his power to make sure he knows the expectations, the standards which we’ve developed at that position. I know he’s working hard.”

Meanwhile, Gutekunst, in perhaps an attempt to smooth things over with Rodgers, said he would be open to taking the signal-caller’s input on personnel moves. Gutekunst acknowledged Thursday that he erred by not telling Rodgers that he was trading up to take Love in last year’s draft.

“Quite frankly, I think over the past three years that I’ve been doing this, I’ve always welcomed that input,” Gutekunst said. “I think he has such an experience in this league that that input would always be something vitally important to me, if he’s willing to give it. That’s not new. That’s not unique.”

Earlier Saturday, Yahoo Sports reported that Rodgers “remains adamant that he won’t return to the team under the current stewardship of general manager Brian Gutekunst,” according to a source in Rodgers’ camp.

“You know, Aaron hasn’t said anything like that to me and certainly hasn’t said anything publicly,” Gutekunst said in response to that report. “So, I think it’s a little unfair to put that on him. But listen, you certainly don’t like to hear those things; but at the same time, it’s kind of part of the gig in the National Football League. But no, nothing’s been communicated directly to me.”

LaFleur and Gutekunst both spoke Saturday at the draft’s conclusion. Earlier in the day, Murphy, in his monthly column on the Packers’ website, said the team is still attempting to work out the issues between Rodgers and management.

“This is an issue that we have been working on for several months,” Murphy wrote. “Brian Gutekunst, Matt LaFleur and I have flown out on a number of occasions to meet with Aaron. We are very much aware of Aaron’s concerns and have been working with him [and his agent, Dave Dunn] to resolve them. We remain committed to Aaron in 2021 and beyond.”

Why do so many vaccinated Britons still feel too frightened to leave home?