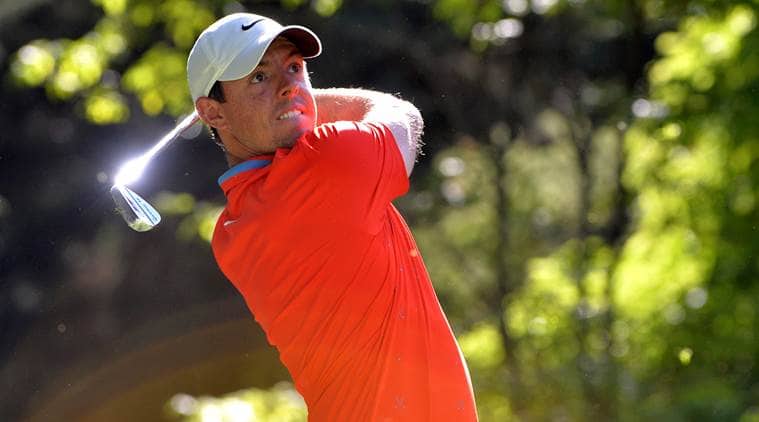 Rory McIlroy plays his shot from the seventh tee during the first round of the WGC – Mexico Championship. (Source: Orlando Ramirez-USA TODAY Sports)

Rory McIlroy came within a whisker of a rare hole-in-one at a par-four on Thursday as the Northern Irishman took the first-round lead at the WGC-Mexico Championship with an eight-under-par 63.

It was McIlroy’s best score in the first round of a World Golf Championships event and earned him a one-stroke lead over Dustin Johnson at Club de Golf Chapultepec in Mexico City.

Tiger Woods, in his first tournament appearance in Mexico, received a boxing announcer-like introduction at the first tee, bringing a broad smile to the 14-times major champion’s face.

That grin promptly disappeared, however, when Woods hit his drive out-of-bounds. His reload was almost as bad, though it stayed in play and he did well in the end to salvage a double-bogey on the way to a 71.

Phil Mickelson’s title defence was left in tatters after he opened with a 79, leaving him 16 shots behind McIlroy.

The leader has not won in almost 12 months but has had top-five finishes in all three of his starts this year.

“Winning is a byproduct of doing all the little things well and I feel like I’m on a really good journey of doing that and I think it’s a matter of time,” he told reporters.

McIlroy, who hit 17 greens in regulation, said he could hit his driver 370 yards in the rarefied air this week, more than 100 yards further than in the cold at sea level at Riviera last week.

“It’s fun,” he said. “I’m glad you don’t have to do it every week but while we’re here might as well make the most of it.

“I had three really good putting rounds at Riviera. I got a little bit of confidence and it was nice to see that carry on to this week as well.”

His near ace came at the 305-yard par-four first, his 10th hole, where he hit a “cut two-iron” that landed softly on the front of the green.

His ball almost grazed the hole as it trickled past, before settling six feet beyond and McIlroy converted the putt for an eagle two.

Woods was four shots worse off at the hole.

“I pulled across it to try to cut it and hit it dead off the toe,” Woods said of his opening tee shot.

“(The next shot) was on the same exact line. (I was thinking) this could be a pretty good number.”

Spieth’s father fills in as caddie in Mexico

Jordan Spieth’s father decided at the last minute to come down to the Mexico Championship without realizing how much he would be needed.

Spieth’s caddie had to leave Wednesday morning when his father died.

Shawn Spieth stepped in as his son’s caddie, his first time on the bag since the 2011 U.S. Amateur, at a World Golf Championship played at an elevation of 7,800 feet.

It started well enough, with Spieth hitting a tough pitch to a tap-in range for birdie, followed by a casual fist-bump with his father.

It didn’t end so well.

“I wish I would have done more for him,” Spieth said after opening with a 4-over 75, his highest opening round since the U.S. Open last summer. “But glad he’s stepping in. Our bright moment was probably No. 1.”

Michael Greller learned his father, John, had died Tuesday night and flew to Portland, Oregon, on Wednesday morning. Spieth was without a caddie, and his father was the first option.

“We had other options _ you always have other options,” Shawn Spieth said. “He felt if we could get a little momentum going early we could ride it. I told him, `Pick your best chance to win. He felt it was.’”

His father felt it might help if Spieth, who hasn’t won since the 2017 British Open, had to rely more on himself to plot his way around Chapultepec Golf Club, only so much more is involved in thin air and a stiff breeze. He could offer his son much guidance on numbers and flight.

“But when you get it going a little sideways, he could use some help,” Shawn Spieth said. “And he was on his own.”

It got going sideways on the back nine, when Spieth three-putted from about 40 feet on No. 10 and then pulled his shot and had to re-tee, leading to double bogey. He dropped two more shots on a day where little went right.

Shawn Spieth at least had a lighter load.

He carried his son’s bag for nine holes of practice Wednesday, and then a staff member from Spieth’s foundation flew from Dallas to Mexico City with a stand bag.

“Carrying a stand bag for 18 was a lot easier than carrying a tour bag for nine,” the father said.

It still was a special moment. Spieth’s father caddied for him at times as a junior, the last occasion at Erin Hills in 2011 for the U.S. Amateur, where he lost in the quarterfinals to Jack Senior of England.

“Mixed emotions,” Shawn Spieth said. “It’s great. But you want him to have his best chance. You got your regular caddie here, that’s your best chance. I learned a lot.”

And as Spieth headed over to sign autographs, his father added with a smile, “It’s good to take attention from him.”

Greller had flown to Portland between Pebble Beach and Riviera, knowing his father had not been doing well. Spieth said based on reports he was getting, he realized John Greller likely did not have much longer.

“It took a lot for him to ask to go see him the Monday and Tuesday of L.A., which it shouldn’t,” Spieth said. “That’s where he needed to be.”

Spieth said he has been in touch with Greller, who was preparing for a service in Portland, with another planned for Iowa. Spieth was not planning to play the next two weeks in Florida, returning at The Players Championship.

Glenn backs Haas to make up for mistake