I have never really wanted to buy a smartwatch for my Android smartphone. There are a plethora of options in the market that somehow pale in comparison to the Apple Watch both in terms of user experience and health features. And I would blame Google for not creating a competitor to the Apple Watch; it’s a missed opportunity.

Now Samsung and Google have joined forces to rebuild the WearOS from the ground up and the first smartwatch to run the latest WearOS 3 version is the Galaxy Watch 4 and Galaxy Watch 4 Classic. The core idea is to prompt Android phone users to opt for one smartwatch OS, an approach that might change the fortunes of WearOS if developers lend support to the platform.

The Galaxy Watch 4 Classic, the one I got for review, has a timeless design. It’s one of those unisex watches that go with every outfit you wear — formals, casuals, or leisure.

The watch fits perfectly on the wrist and I can wear it all day. The 46mm version (42mm is also available) looks large on my wrist but it never gives the impression I am wearing a smartwatch even though it is. And this look, which resembles a traditional timepiece, only adds to Galaxy Watch 4 Classic’s appeal. The latest Android smartwatch comes in two designs and four sizes. I got the Watch 4 Classic for review. (Image credit: Anuj Bhatia/Indian Express)

The watch is made of stainless steel and has mechanical rotating bezels, so one has to physically move the edge of the screen to go through the interface. That rotating bezel is actually a clever way to interact with the user interface, and that to me makes the Watch 4 Classic distinct from the Apple Watch.

You will find two physical buttons on the right side of the screen with the top one being used to take you back to the home screen and the other button taking you back a screen. These two buttons are the primary way to take ECG-based heart rate readings (not available in India) as well as calculate body fat percentage and muscle mass (more on that later).

It supports 20-mm silicon traps which can be easy to swap. The watch is IP68 water and dust resistant as well as MIL-STD-810G certified, so if you are into extreme sporting activities and hiking, this is the watch to go for.

The circular display on the Watch 4 Classic is outstanding. The 46mm version I tested features a 1.4-inch, 450 x 450 Super AMOLED display. It’s bright, colourful, and I had no issues reading notifications under direct sunlight. There is an always-on mode, allowing you to keep the screen awake 24/7. I rate the Galaxy Watch 4 Classic’s display as good as the Apple Watch Series 6.

…but what about the software and user interface?

This is the primary reason I agreed to review the Galaxy Watch 4 Classic in the first place. Goodbye Tizen, and enter the WearOS 3.

Yes, Samsung is no more using its home-baked Tizen operating system for the Watch 4 and Watch 4 Classic. Instead, the new smartwatch is powered by the reimagined WearOS developed by Samsung and Google. But when I looked at the interface, WearOS 3 is very much reminiscent of the TizenOS used in Samsung’s previous-generation smartwatches. Sure, there is a comfort level with the interface and icons, but to be clear, the Watch 4 Classic is running a brand new operating system.

Tizen was never an unfinished smartwatch operating system like Google’s WearOS but it lacked third-party apps, something Apple championed from the very beginning and the reason why the Apple Watch is so successful. To me, the new user interface and OS is a better fit for the Watch 4 Classic and it shows. Samsung has adopted the interface for its smartwatch by giving it its own spin, just like OneUI on Galaxy smartphones. 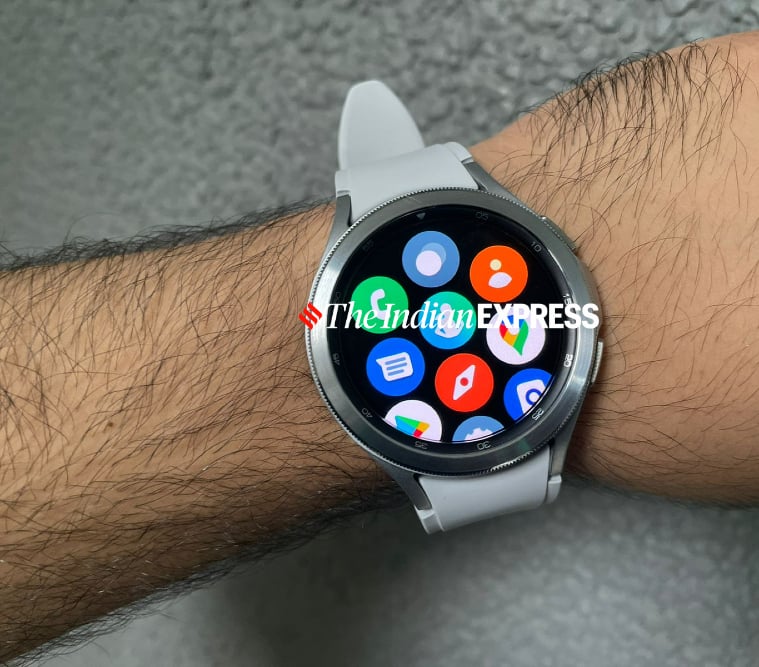 The Watch 4 is the result of the joint effort by Samsung and Google. The smartwatch runs on WearOS 3. (Image credit: Anuj Bhatia/Indian Express)

Swiping right from the main screen houses Tiles (or widgets) and left gets you to the notifications. A swipe up from the home screen will take you to all of your installed apps, which reminds me a bit of the app clutter on the Apple Watch. You will find a healthy mix of apps from Google and Samsung. By swiping down from the main screen leads to a quick panel.

The big part here is the ability to download apps from the Google Play Store. I can finally download and install apps that I always wanted to run on a Samsung-made smartwatch. For instance, I can finally use Google Maps and find my way without needing to open my phone. YouTube Music is here and so is Google Gboard. Unfortunately, Samsung is not letting you use Google Assistant on the Watch 4. So we are stuck with Samsung Bixby, which is a hit-and-miss in responding to most queries.

Another thing I liked about the Galaxy Watch 4 is a nice collection of watch faces, especially those animated ones. But there comes the thing that could irritate iOS users: lack of support for iPhone users. If you own an Apple Watch and want to use the Galaxy Watch 4, the Galaxy Watch 4 would not support iOS. It’s odd, because the WearOS always supported iPhones. I don’t know if this limitation is limited to the Watch 4, but the idea seems to be inspired by Apple. The Apple Watch only works with the iPhone and Samsung too wants to make a statement with the Watch 4 that this watch is designed specifically for Android. Fair enough.

Samsung is not far behind Apple in its approach to cram maximum health sensors and features on the Watch 4. Although both have a different approach to looking at health, I let users decide how they want to use the smartwatch. Again, there is no right or wrong approach.

As I said, the Watch 4 boasts of a new number of health features but not all are available in India. For instance, the ability of the smartwatch to measure electrocardiogram (ECG for short) and blood pressure are only supported in select regions. But even if these features come to India at a later date, the results will only be indicative and you will still need to consult a physician.

Except for ECG, all basic health features are working on the Indian version of the Watch 4. Heart rate monitoring, sleep tracking (now with snore detection), blood oxygen detection (SpO2), and a new bioelectrical impedence analysis (BIA) sensor. The BIA sensor measures body fat (think of replacement of smart scales) and calculates the amount of water in the body. It can be measured by sending a weak electric current through the body. All you need to do is place your ring and middle finger on the two physical buttons and in seconds, you get details on body fat, skeletal muscle, fat mass, body fat, BMI, body water, and BMR. Sure, a BIA sensor can give an estimate of body fat but it’s hard for an average user to understand what it all means. Also, I had no access to a smart scale at the time of review so I could compare readings measured by the Watch 4. 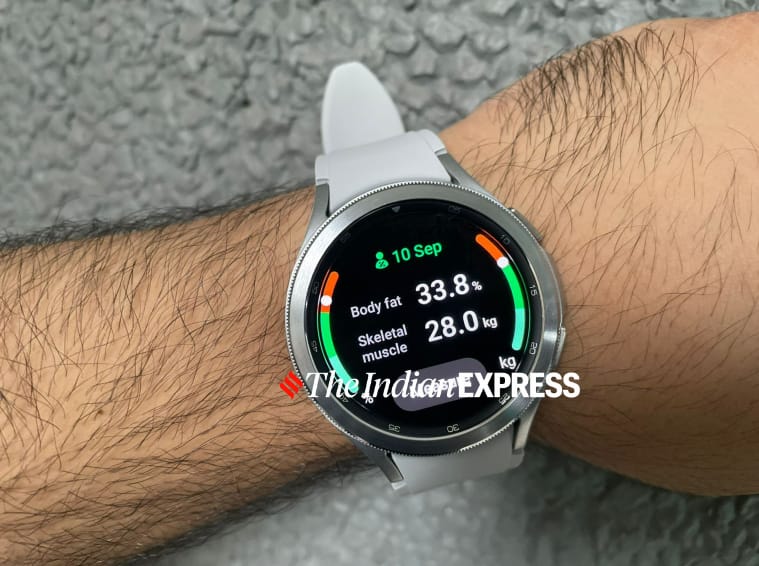 The smartwatch has a new BIA (bioelectrical impedance) sensor which estimates the percentage of fat, muscle and water in your body. (Image credit: Anuj Bhatia/Indian Express)

The Watch 4 is fairly accurate at measuring heart rate and I got roughly similar results when compared to the Apple Watch. The results were also similar to the SpO2 when measured alongside a pulse oximeter. Sleep tracking is another feature that might be useful for users but the interesting part is that now you can detect the nocturnal buzzsaw and snore. But for that, you have to keep your phone on a bedside table. Sleep tracking was fairly accurate and the watch knew how many times I woke up during the night. But I am not so sure about the steps count feature on the Watch 4. I feel the watch counts higher numbers and I found this on many occasions. All the data is viewable on the Samsung Health app. My complaint is that there should be a better way to view that data.

The 1.18GHz Exynos W920 Dual Core 5nm chip feels fine for a smartwatch like this. I never faced issues while navigating the user interface. Apps opened quickly and there was no stutter. The 46mm Watch 4 Classic features a 361mAh capacity battery and well, it lasted a full day without activating the always-on display. I used to wear the watch all day even while sleeping. I think you want better battery life, go for the bigger size. 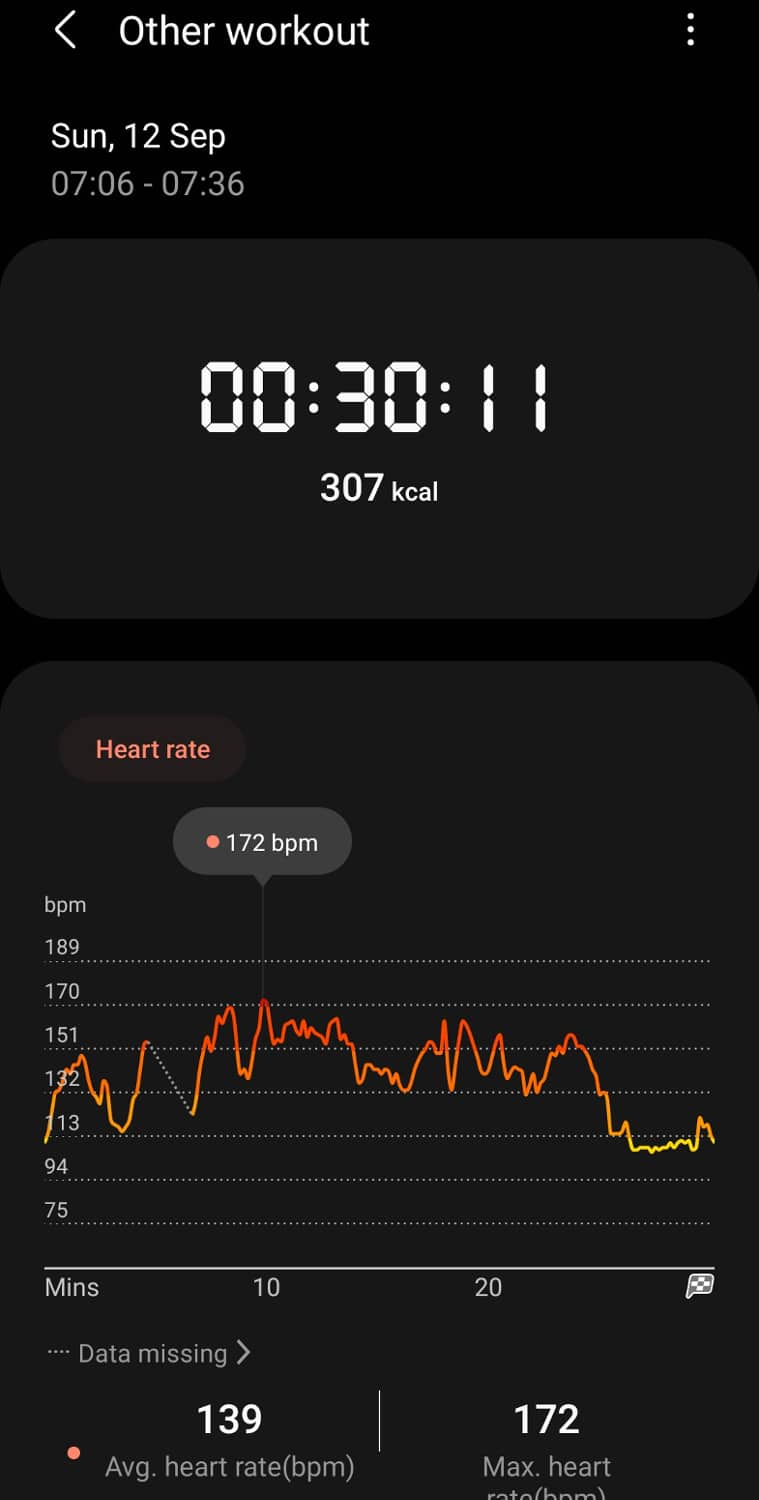 The watch can track 95 different activities, from the basics and to intense activities such as skiing. (Image credit: Anuj Bhatia/Indian Express)

Samsung Galaxy Watch 4 Classic review: Should you buy it?

It’s a good question to ask. For me, the Samsung Galaxy Watch 4 is closer to the Apple Watch though it’s not there yet. But I am fine with it because the Watch 4 is anyway not compatible with the iPhone. The true essence of the Watch 4 (it applies to any smartwatch) is what it can really do and how you can take advantage of it. That being said, I enjoyed the Watch 4 Classic partly because of the rotating bezel and all the health and fitness features you get with it. Look, if you own the Galaxy phones and are looking to buy a premium smartwatch, the Galaxy Watch 4 Classic is the best option right now.