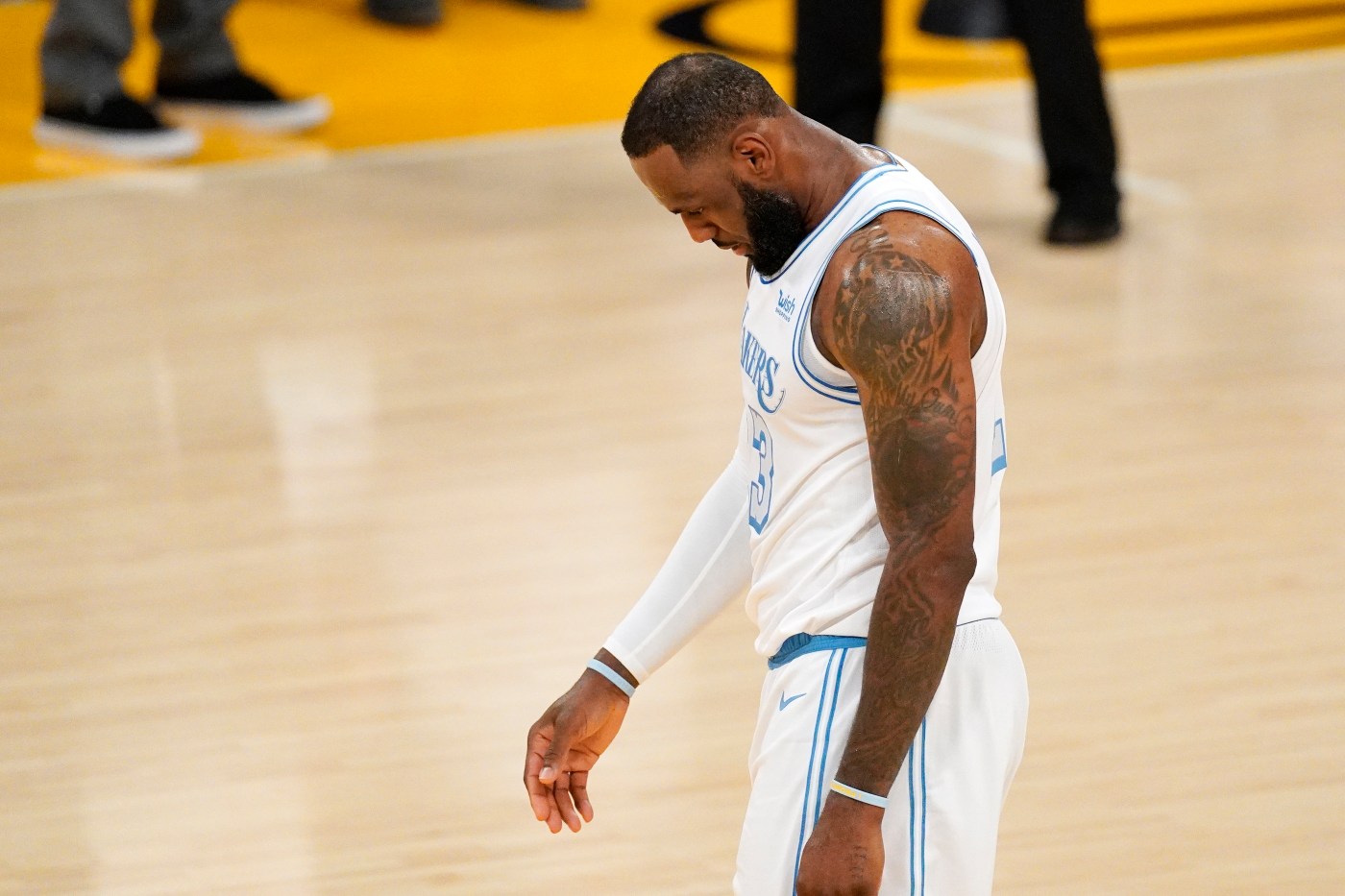 There’s something LeBron James would like to give a rest.

And it’s not himself.

There’s a dialogue swirling around the Lakers that goes like this: James is 36. He’s played every game. He’s averaged 35 minutes and totaled 1,120 minutes – the only players who have played more this season are Julius Randle and Fred Van Vleet, both 26.

With the Lakers playing without Anthony Davis and Dennis Schröder, the depth that was supposed to ballast the team in dog-day stretches like this is no longer there as a safety net, placing even more of the load on James’ shoulders.

Should James, in light of all these facts, be willing to take a night off? The quizzical expression on his face spoke to just how far the four-time champion is from the “narrative” that he immediately shot down Monday night.

Even as the Lakers have slid into a three-game losing streak – dropping four of their past five games and looking quite vulnerable when they visit league-leading Utah on Wednesday – the questions about James’ rest have continued to spark and dominate conversations about just how far his body can go. James has reached a point in his career where the 43 minutes he clocked in a 127-124 overtime loss to the Wizards can seem less like a heroic effort than tempting fate.

For Lakers fans crying for James to slow down, some of the fear has nothing to do with him specifically. Many still have memories of Kobe Bryant averaging 38.6 minutes for an ill-fated 2012-13 Lakers team and rupturing his Achilles tendon shortly before the playoffs, an injury from which he would never fully return as the same player. Perhaps Anthony Davis’ difficulties with his right Achilles have also stoked those flames – or perhaps the worry has harkened to the 2018-19 season when James suffered a groin tear that sent that campaign careening into oblivion.

If James is registering anything close to concern about injuring himself, it’s impossible to tell through his Zoom conferences with the press. He seems most tired of answering questions about his workload.

“I have never asked for time off or time throughout the season,” he said. “And it’s growing to a point where it’s not even coming from me anymore, it’s just like, ‘OK, LeBron should take time off,’ or, ‘Why is his workload at this?’ I’ve been hearing it for five, six, seven years now and I’m still going strong.

“So I don’t need a handout, I’m not looking for a handout,” he added. “My job is to go out when I’m available, when I’m healthy to go out and play and that’s what it’s all about.”

While age is a force that eventually comes calling for everyone, it has granted James unusual latitude. Between the regular season and the playoffs, he’s logged 60,482 minutes (behind only Kareem Abdul-Jabbar and Karl Malone). Out of 1,395 possible regular-season games, James has missed only 98 in his 18-year career.

And yet he’s still putting up an MVP case. There have been only 15 prior instances when a player has averaged at least 25 points, 8 rebounds and 8 assists per game like James is averaging now – and James is the only person to have such a season past the age of 29 (and done it three times). The only other 36-year-old to average 25 points for a whole season is Malone.

Maybe it’s the product of growing up in a factory town of Akron, Ohio: James is incredibly proud of his durability and availability. He was particularly pleased in the 2017-18 season, when he played all 82 games and 22 more in the playoffs – the last three of which were with a broken hand. The tales of his workout and recovery regimens veer into urban legend: James reportedly sleeps 12 hours a day, and spends as much as a million dollars a year on his training and nutrition. His trainer, Mike Mancias, has been a trusted partner since his second year in Cleveland and the two know the limits of James’ body better than any social media speculator.

There’s also historical chases afoot that are not about winning in the short term: Jared Dudley pointed out that James’ case for his fifth MVP is strengthened by having played every game, and James, whether he admits it or not, cares about chasing all-time records. That includes Abdul-Jabbar’s career points crown – with his 38,387 to James’ 35,067 – which will require a few more diligent scoring seasons to catch.

It might be prudent for the Lakers to not play James for all 72 games this season, Lakers coach Frank Vogel admitted, and the team is considering day by day if he needs any nights off. But Vogel also didn’t seem to think twice when asked how James is handling being the sole superstar trying to carry the Lakers every night.

“How he’s managed it? He’s a workhorse,” Vogel said. “He’s doing everything he can for us.”

There’s little doubting that James is putting up numbers in the past nine games, but some of the crispness has eroded his game. His 3-point shooting that was lauded at the beginning of the season has dropped to just 23% in the last nine games, which includes four overtime contests. In that same span, he’s averaged 6 turnovers per game – in part a consequence of taking on more ball-handling with Schröder missing.

The signs point to fatigue. James came close to admitting as much when talking about how much energy he’s expending in those minutes as he replaces the scoring and playmaking the Lakers don’t have at the moment. He grimaced talking about his eight turnovers against Washington.

“I’d much rather our team be healthy and we’re playing whole basketball than me having to go out and be the primary all-the-time ballhandler,” he said. “Right now, it’s needed because we have some guys that’s out, and it’s needed for me to do that, and I got to take responsibility of it.”

Whether that’s short-term weariness that will look better after a condensed All-Star break and the return of teammates, or whether it’s a long-term aging process that is gently diminishing James’ ability – perhaps no one can say with certainty.

The only thing James and the Lakers can control is approach. And he doesn’t seem to be ready to let himself off the hook that easily, even if others want him to take a load off.

“We all need more rest, (expletive),” he said. “This is a fast turnaround from last season and we all wish we could have more rest. But I’m here to work, I’m here to punch my clock in and be available to my teammates. And if I’m hurt or if I’m not feeling well, then we can look at it then.”

One Militant Killed In US Bombing In Syria: Pentagon

The US military said the location was used by Iran-supported Iraqi armed groups. (Representational) Washington:

How Aussies could take two teams to T20 World Cup

Croft angles for Broncos No.7 return

JOFRA ARCHER: England captain Root has told be fearless in the rest of the Test series