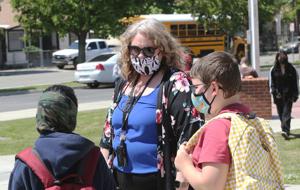 Rattle off a list of what Oildale is known for and you might come up with its rich music history, breakfast joints with fare hearty enough to power a shift in the oil fields and a tight-knit community whose elders often trace their roots to the Dust Bowl migration.

Add one to the list: Oildale has a nationally-recognized school.

Standard Middle School was the only school to be added to the list in California this year, which earned the notice of State Superintendent Tony Thurmond. He praised the school in a statement for “(managing) to complete the rigorous application process during the COVID-19 school closure period.”

Schools have the opportunity to renew their designation every three years, and just 30 schools in the state did that this year, including Bakersfield’s own Fruitvale Junior High.

Oildale is a community that encompasses everything from million-dollar homes to some of Kern’s lowest-income communities off North Chester. A lot of the working class community struggles, and those struggles have become especially acute in the past year.

Principal Susan Denton notes that the poverty many Standard Middle School students experience is generational, which brings its own challenges. But there’s a sense of optimism as she and her staff discuss doing the hard work of meeting these difficulties in the community.

“We want our district to be that little gem for the community,” she said. “Our superintendent and our school board really has a vision for where we head for the future, where we become a focal point for Oildale.”

Standard Elementary Schools Superintendent Paul Meyers said the district has been able to invest heavily in its middle school as well as three elementary schools thanks to legislation signed by Gov. Jerry Brown in 2013. That increased funding, particularly for Standard, where nearly 90 percent of students qualify for the free and reduced lunch program.

Meyers said the district received a roughly 30 percent boost in its budget, which it put to use by investing heavily in support staff. Standard Middle School has two counselors, two assistant principals, a psychologist, a behavior intervention specialist and two librarians.

This investment is part of why the district earned recognition. Standard Middle School was noted for being a leader in social emotional support. Denton said the school works hard to make sure students feel cared for at school. She likes to talk about valuing the whole student — not just their grades.

“This is their stability point,” Denton said. “Our goal is to make this the safe point for kids.”

That includes social programs like The Tribe, a club that bridges friendships between general education and special education students, who make up 10 percent of the children on campus. A grief counseling group brings in dogs from Marley’s Mutts to help students who have lost family members. Students started a club for gay and lesbian students and their allies called The Pride.

Jeremy Hanson, the school’s behavioral intervention specialist, said everyone on staff works together to make sure students who act out are given extra resources, such as coaching and counseling, and alternatives to suspension. Sometimes acting out at school can be a sign of tumult at home.

Right now Standard Middle School has a counseling building under construction that will be staffed by Hanson, psychologists and counselors.

But in this year of distance learning, Hanson said he and the campus supervisor have gone off campus. They’ve visited more than 400 homes. They’ve done everything from check-ins to dropping off clothes, shoes and other supplies, making deep connections with families when they need it.

Standard Middle School also won recognition for its student programs. Its electives include theater, choir and band, which means that last year the school put on a full-blown production of “High School Musical.”

Students Haley Reed, Anthony Padilla-Swenson and Blakely Ross took a leadership class. In a typical year, they would organize rallies, dances — the fun social stuff. But this year they sent out newsletters with tips to keep up school spirit virtually. Recently, they made posters welcoming students to campus for their very first day.

Allison Cheatwood is a special education teacher at Standard Middle School, as well as a former student and resident of Oildale with fond memories of the school. She says that’s not that unusual. Standard Middle School, as well as other schools, including North High and Beardsley Elementary schools, have long been pillars in a community where people tend to stick around.

“You have this society where people grew up here and they stayed here and they had families here,” Cheatwood said. “I’m one of them.”

She said she always runs into people impressed she works at the school. Outsiders might not always understand the school’s importance in the community.

“We kind of run under the radar,” Denton said.

Read More »
PrevPreviousKevin Parker thanks fans after Tame Impala’s single The Less I Know the Better passes one billion streams
NextA Tech Company Tried to Limit What Employees Talk About at Work. It Didn’t Go Well.Next

Africa: Cosafa Sides to Clash in the Qualifiers for 2022 Women’s Afcon