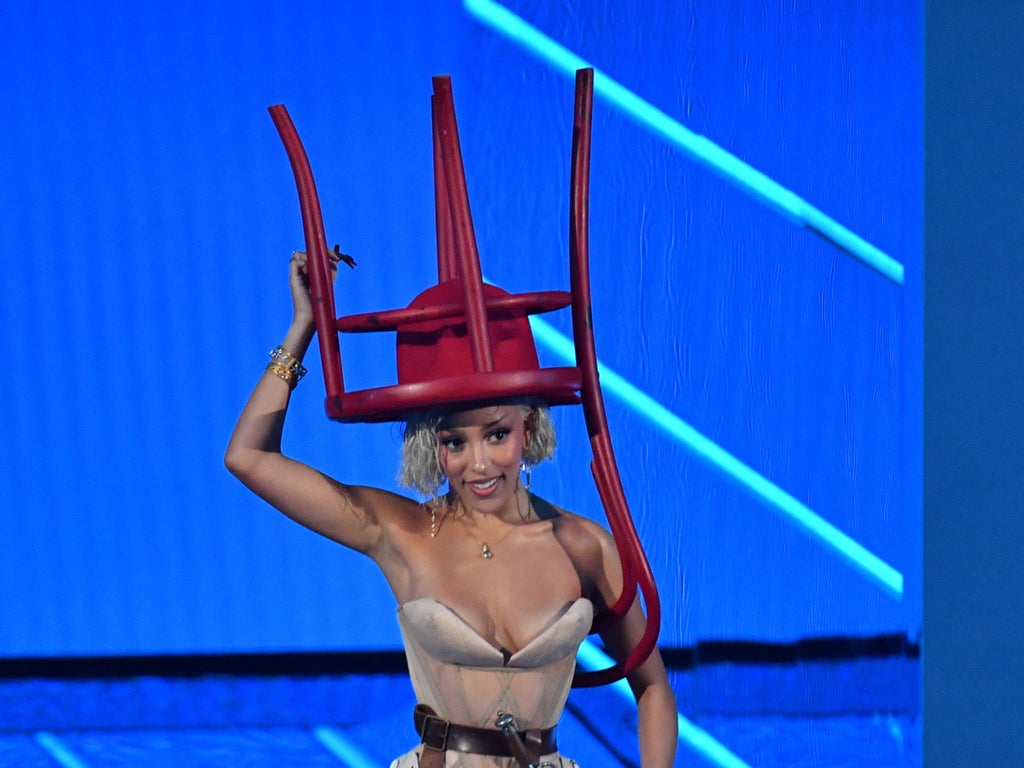 As the host of MTV’s 2021 Video Music Awards, it was only right that Doja Cat showcased not one, two, or three, but six different looks.

Fans of her music will be all too familiar with the “Kiss Me More” singer’s daring sense of style, which was on full display at Sunday’s award ceremony.

Her most memorable look – which had the internet both bewildered and in hysterics – was a multi-purpose red chair which she wore first as a hat before using as a seat.

She appeared on stage wearing the piece of furniture on her head, with her arm weaved through the chair’s back.

“Doja that chair not heavy????” one Twitter user asked. Another said: “I know Doja Cat did not just go on national television wearing a chair as a hat.”

Those busy trying to figure out the wild choice of accessory may have missed the dagger around her waist or her horse printed dress, which was from Andreas Kronthaler’s Spring 2019 collection for Vivienne Westwood.

The chair also proved practical, as she was later seen taking it off of her head and using it as a seat.

Her red-chair hat was the penultimate look from the evening. She closed the ceremony in a pair of surreal bird-feet boots, which she paired with a bright orange pilgrim-style hat.

Another talking point of the evening was her fourth look of the night, as she accepted the “Best Collaboration” award for her single Kiss Me More which features SZA.

The host sauntered onto the stage in a quilted, hooded dress that encapsulated her whole body, bar her hands and her face.

“I never thought I’d be dressed as a worm while accepting an award,” she told the audience.

Her first three looks of the night saw her take to the red carpet in a black corset, paired with red latex thigh-high boots.

Later, she swapped out the boots and wore the corset with a pair of black, loose trousers.

Thirdly, for an acrobatic performance of “You Right”, a single from her latest album, “Planet Her”, she wore flowing red trousers with a matching bustier top.

While the singer’s outlandish looks have gotten everyone talking, they weren’t unexpected. In an interview with Variety last week, Doja Cat said she planned to put on a show that would be far from mundane.

“If I did the same thing every day, I’d lose my mind, and that’s been my whole life,” she said, adding: “So that’s the definition of my career.”

She said that while her performances would be “expressive” and “visually compelling”, she planned to be a “cringe” host.

On hosting, she said: “I think it’s going to be very fun, and I’m just going to do what I do, which is be cringe. That’s basically it. God help us all.”

How The Southern U.S. Border Has Become A Nearly Constant Humanitarian Crisis : NPR

Walking a fine line – trekking and keeping our wilderness wild