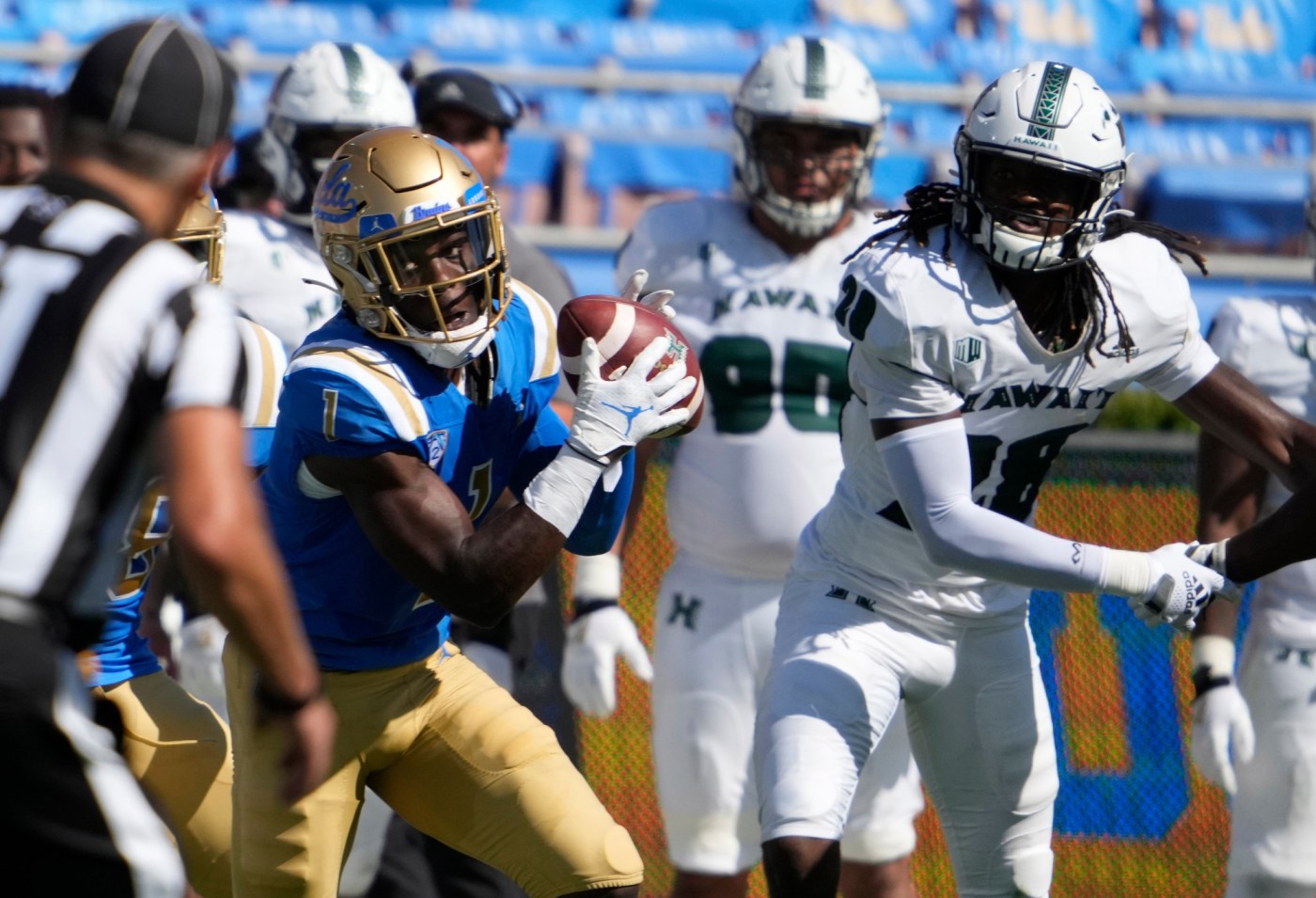 A veteran-heavy secondary has provided a spark for No. 13 UCLA in the first two games of the season.

Safety Quentin Lake and nickelback Qwuantrezz Knight have displayed a level of physicality and a knack for swarming to the ball to make plays.

Lake led the Bruins (2-0) with seven tackles against LSU and cornerback Mo Osling III led the team with five tackles in the season opener against Hawai’i. Both players also recorded two pass breakups in those respective performances. Knight has averaged 4.5 solo tackles in the first two games.

The Bruins have been rotating players in and out often to maximize the secondary’s potential.

“We have depth in the secondary,” Coach Chip Kelly said. “You saw us changing groupings out there – it was like watching a hockey game with changing lines, but I think it is because our defensive staff did a great job of keeping everybody fresh.”

Defensive back Jay Shaw started all seven games at cornerback in 2020 but hasn’t been listed on the two-deep depth chart this season. Shaw has continued to play a meaningful role, though, making an interception in the opener and covering LSU’s top receiver Kayshon Boutte.

“Every guy was just so dialed into the game plan and there is not a drop off when you go from one group to another group,” Kelly said. “I’ve been impressed with them for a long time. I’ve been really happy with our defense for a while now.”

The defensive backs know there remains room for improvement after the Bruins allowed an average of 30 points and 274 passing yards per game (ranked 114th nationally out of 127 teams) during the seven-game 2020 season.

“You never forget about previous games (or seasons) but you have to move forward,” Osling said. “We’re a different team now. I feel very confident about this group of guys.”

Through the first two games this season, the Bruins have allowed 286 passing yards per game, which ranks 115th in the nation, though some of that is the byproduct of opening double-digit leads on their opponents and forcing them to throw more often.

Boutte caused problems for the Bruins’ secondary in their last outing, catching nine passes for 148 yards and three of the four receiving touchdowns they’ve allowed all season. Only 16 of Boutte’s yards came after the catch.

The secondary still needs to work on limiting big plays, which kept the score closer than the actual game might have been against LSU.

Two of Boutte’s touchdowns covered 44 and 45 yards when LSU was down by double-digits in the second half.

Boutte used the referee as a screen while catching a pass from quarterback Max Johnson and broke free of Shaw’s coverage and the surrounding defenders to score on the 44-yard touchdown in the third quarter to make it a four-point game.

The play could have helped turn things around for LSU, but the Bruins managed to contain the Tigers much of the rest of the night. LSU didn’t score again until Johnson’s 45-yard touchdown pass to Boutte when they were trailing by 18 points with 4:08 left in the game.

“We just have to go out there and execute,” Osling said. “Just be in the moment and not make the moment much bigger than it needs to be.”

Coming out of their bye week, the Bruins are preparing for a Fresno State offense that has averaged 385 passing yards per game (sixth in the nation). The Bulldogs (2-1) are the only FBS Top 10 offense that has played three games already.

“I know his completion rate is around 75% and he’s really good,” Osling said. “I’m looking forward to the challenge. He’s probably the best quarterback we’ve faced so far this season so it will be a test for our DBs. … We have to limit the big plays and cut down on the completions.”

Haener also is a threat to run, with three rushing touchdowns on 14 attempts.

“We’re going to have our hands full containing him,” Kelly said. “He reminds me a lot of (Seattle Seahawks quarterback) Russell Wilson. When he takes off he’s looking for touchdowns.”

Passwords No Longer Required To Sign Into Microsoft Accounts : NPR